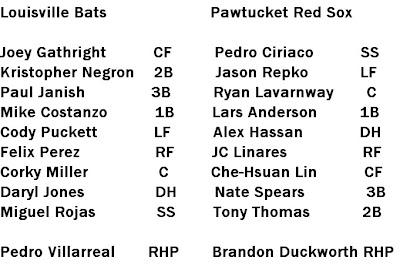 Donnie Joseph wins!4-3 in 13 innings. Sorry you don't know who Donnie Joseph is, because he's awesome, even if he says shit like "Revelation 4:11. Read it and believe it." DONNIE!!!

Brandon Duckworth was the starter for the Red Sox and he pitched five innings, but it took 102 pitches for that to happen. He gave up two runs on four hits, a couple of walks, and doled out a pair of K's. One run came in the first inning, by way of an RBI single by left fielder Cody Puckett. Second baseman Kristopher Negron hit a solo home run in the third to top it off at 2-0. Sooo... Duckworth is a Mormon, right?

Righty Pedro Villareal started for the Bats and took things a little deeper, going seven innings and striking out seven Pawtucket guys. Nice. The Red Sox didn't even get to him, really, until the sixth inning. Jason Repko led off with a single and Ryan Lavarnway batted him in with a single. Lavarnway made it over to third when Anderson grounded out, not that it mattered, because Alex Hassan hit a home run, giving Pawtucket the 3-2 lead. Thanks, Hassan.

But the Bats held on, and got lucky when Daniel Bard took over for the seventh. Daniel Bard is Pawtucket's crappiest reliever, and that is because he doesn't care about the team, only himself and his road back to Boston. And so it came to pass that little shortstop Miguel Negron hit a line drive home run to left. TIE GAME FOREVER. Bard followed that beauty up by hitting Joey Gathright with a pitch. Probably not intentionally. But it's nice to see Gathright still getting work.

Nick Christiani entered the game after Villarreal, and did a nice job holding things together for three innings. Pawtucket tossed in three innings by Tony Pena, and three by Will Inman, who took the loss and took it deep and hard. Top o' the thirteenth, RF Felix Perez doubles and DH Daryl Jones singles so Perez can score and they were so happy.

Kanekoa Texeira pitched the bottom of the 13th for Louisville and Pawtucket loaded up the bases, but Nate Spears grounded out to end it all. Bummer. Win goes to Donnie Joseph, who pitched the eleventh and twelfth innings.

i'm in a state:
1. "Pawtucket appeared to have the game won when, with the bases loaded, Bats reliever Nick Christiani let one fly that zipped past catcher Corky Miller. Jason Repko, who broke for home, was thrown out at the plate as Miller quickly fetched the ball and fired to Christiani for the out." - Kevin Geary. Corky Miller still bringing home the bacon.

2. JC Linares went 4-6 last night. So great to have this guy back. Can we get rid of Alex Hassan now? JUST KIDDING.

4. Yesterday the Pawtucket Red Sox unveiled a bronze Ben Mondor statue, which is so wonderful and nice.

5. JOSE IGLESIAS IS ALIVE AND WELL AND REHABBING WITH THE SPINNERS. Did I tell you I just went to a CT Tigers game featuring the Spinners? I did, it was great, I will tell you about it tomorrow.

6. From SoxProspects.com: "Check out who the opposing leadoff batter is in the PawSox game. The Reds apparently signed Joey Gathright out of the indy leagues. And now he's hitting .296/.349/.327/.676 for them. Naturally. " - posted by Yirmiyahu.

TONIGHT! Aaron Cook will start for Pawtucket and Sean Gallagher will try to outdo him. Don't forget, the Bats are the Reds, so maybe you should check the game out after reading this for some good ideas.