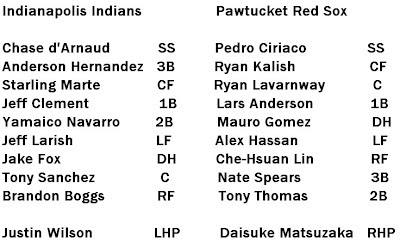 Pawtucket WINS! 13-2 in a game that was not so much a game as a childhood fever dream. Or like taking LSD in the park. And the best pitcher Pawtucket faced was the freaking right fielder for the Indians, Brandon Boggs. It was that kind of night.

Your starting pitcher for Pawtucket was Justin Germano. Germano pitched six innings and only gave up one run, a solo thing by left fielder Jeff Larish. Germano struck out five and didn't walk anybody. Mark Prior and Daisuke Matsuzaka combined to pitch the last couple of innings, with Matsuzaka giving up one run toward the end of the game.

Wait, hold on! Reverse that! It was Crazy Backwards Day at McCoy Stadium, with starting pitcher Daisuke Matsuzaka only pitching an inning and a third, mostly because he was terrible last night. After Matsuzaka gave up a single to RF Brandon Boggs in the second, he was guided, gently, dugout-ward so he could perhaps take a hot shower, call his mother, have a beer. And so he was replaced by Mark Prior, who is on the Pawtucket Red Sox. Yes, Mark Prior. Not former PawSox great Tim Kester, but Mark Prior, who had been rehabbing. Prior finished the second inning, then went on to pitch a scoreless third. Justin Germano pitched six innings of relief, because he is the biggest, brightest star in the starting ro.

So that was weird, but let's move on. Starting pitcher for Indianapolis was Justin Wilson, and haven't we seen him before? Wilson decidedly did not have it last night, but they let him pitch four innings anyway. Bottom of the first, Indians up 1-0. Wilson walked shortstop Pedro Ciriaco, who I love. And then... And then the greatest thing in the universe happened, which was that Ryan Kalish hit a home run. ATTENTION: RYAN KALISH IS ON THE PAWSOX NOW. And any time Kalish ran or swung a bat or stole a base, I fretted. But I guess the people upstairs know better than I do about Kalish's condition, so I'm sure he was fine. Fine, as in hot. But also as in uninjured.

Pawtucket added a couple more runs in the second, when left fielder Alex Hassan hit a two-run single. The Red Sox scored 13 runs, so it was like making a soft-serve ice cream cone and you just keep holding the lever down and swirling the ice cream on, until it towers on top of the little beige cone. Third inning, Kalish hit an RBI single. He must have been so happy. Fourth inning... Hassan singled but otherwise Wilson got three outs without allowing a run.

And then, oh my god. Bottom of the fifth. PawSox are up to bat, and who is pitching for the Indianapolis Indians? Kris fucking Johnson. KRIS JOHNSON! Where the hell did they dig him up? And it was awesome, he gave up a three run homer to Ryan Lavarnway. HA HA HA EAT IT, JOHNSON!! Lavarnway should have rushed the mound, tackled Johnson, then pissed on him as he lay on his back, struggling to get up like an upended turtle.

In the bottom of the seventh inning, the Indians sent reliever Jose Diaz to the mound. Diaz... He's, like... Well, he's a big kid. That's about half of it. He is pretty fat. Like Sabathia, but probably bigger. And he wore these crazy glasses and just looked like weirdo on the mound. I loved his glasses, honestly, but Diaz did not look like a reliever. A couple of walks, a couple of singles, and a wild pitch gave Pawtucket two more runs.

And then the Indians right fielder, Brandon Boggs, pitched the eighth inning. I don't know if Pawtucket was just phoning it in with a 13-2 lead, but Boggs set them down in order. He was pretty pleased with himself, too.

what did you do there? i got high!
1. Nobody much at the park last night to see Matsuzaka, Ryan Kalish, Mark Prior, etc. Astounding. Also, Daniel Cabrera was in the stands charting pitches. You maybe remember him as the crazy tall guy who pitched for the Orioles and got into a mess with Boston. I happen to think he is very handsome.

2. The Pirates signed Kris Johnson last December: "Draft picks that go as high as Johnson did, are expected to do a little more than flounder around the minors for years on end." - Nice one, Rumbunter. I still absolutely hate Kris Johnson.

3. Hyder's post-game interview as with Kalish, of course. Kalish essentially said he was having a great time in Pawtucket, with his teammates, helping out the team, etc. For selfish reasons, I want Kalish in Pawtucket for the rest of the season.

4. The big scoreboard at McCoy Stadium was dark last night, which was weird. Should be up tomorrow, right?

6. Lavarnway went 4-5 and Gomez went 3-5. Anderson did not get a hit and expressed his frustration by yelling 'Fuck' a few times. I'm sure all 19 fans heard him. The pitchers also stacked K's like Hova.

I noticed on the highlights that Kalish was wearing his Boston "B" helmet for the Paws. Is this common among guys who have been in the majors and are at AAA? I mean he couldn't be wearing a different HAT than everyone else, right? But he carries his big league helmet around with him?

Yeah, they usually make concessions for big leaguers. For example, Matsuzaka is allowed to use a major league baseball when he pitches in Pawtucket.

You do occasionally see a mix of major and minor league equipment, especially with visiting teams for some reason.