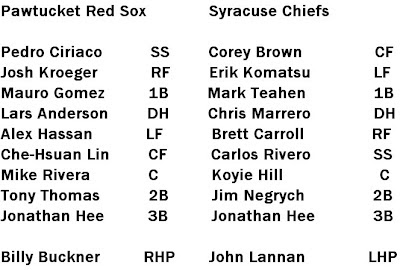 Syracuse takes it, 3-1, and sweeps the almighty Red Sox. It cracks me up that Pawtucket just swept Buffalo, and I'm sure people who care about that sort of thing are like, WTF, assholes? But aside from people in the biz, I may be the only one who cares about the PawSox road record. Or about what happened to Chip Ambres.

Starter for Pawtucket was Billy Buckner, who is not the guy from The Price is Right. Buckner has not really had a good start yet with Pawtucket. This one doesn't look too bad, since he pitched five scoreless innings. But it's also not exactly thrilling, and neither is Buckner. Yet?

John Lannan started for the Syracuse Chiefs and pitched six innings and gave up a home run to Tony Thomas, who says shit like "Gym time bout to be Beast Mode". That's it. His relief (Pat Lehman, Atahualpa Severino, and Henry Rodriguez) calmly and happily completed the game, tamping the PawSox down like tobacco in a pipe.

Alex Wilson blew the game in the sixth inning by walking Chris Marrero and then somehow allowing Brett Carroll to triple. You may not know this or even need to know this, but Brett Carroll is the hottest hitter in Syracuse right now. Yes.

With Brett Carroll dangling over at third like an irresistible, perfectly seared pork chop, the Most Adorable Shortstop in the World singled, scoring Carroll and sealing the win for Syracuse. Yay and such.

Mark Prior entered the game after Wilson and gave up that last run when second baseman Jim Negrych did that sac fly thing. Did you know that Mark Prior had intentionally walked catcher Koyie Hill? Mark Prior wants to win, THAT'S WHAT. Prior also talks to Daniel Bard a lot, which can only be helpful. Although as a baseball layperson, I would not put extended conversations with Bard very high on my list of fun things to do.

first north:
1. Pedro Ciriaco and Mike Rivera each had two hits. Tony Thomas' home run was one in a recent series. Thomas is hitting a little bit lately, which is nice for him.

2. Conversely, big bat Mauro Gomez has been in a mild slump. And it's nothing that freaky sex can cure.

4. This one time John Lannan gave up a grand slam five pitches into a game. Oh how I love you, sweet crazy baseball. Also, Lannan wants to be traded and the Rockies may be interested. And also, you're drunk. And this one time Lannan was ejected from his first ever big league game for beanballin' it.

5. Please check out the From Section 207 blog about the Chiefs, especially if you are into minutiae. And dude, I totally sat behind that woman in section 207 this past Monday and the hecklers in that section are hilarious. They ripped on Nate Spears pretty good, which I enjoyed since Nate Spears is so sketchy and weird.

6. "Henry Rodriguez has been placed on the DL with a strained finger. The injury initially occurred when Rodriguez slammed his finger in a door. Just more evidence of Rodriguez trying to slam the door and having something get in the way." - HA.

7. Still no Jose Iglesias, and it's getting weird and I feel like no one is talking about this.

8. Yeah, I went back to Syracuse and while it was not as bad as last time, I have affirmed that it is not anywhere I'm in a rush to return to. It's a nice park, but both nights I was there it was like a morgue. The autograph kids only wanted the Pawtuckets, and the Pawtuckets blew them off so, so horribly that I heard one man wish a fiery van crash upon them. Hey, PawSox: Why can't you be nice like other teams? I'm looking at you, Ryan Lavarnway!

TONIGHT! Pawtucket's back in town, playing the Louisville Bats (CIN). JC LINARES IS BACK OMFGWTFBBQ!!!! I'm so excited!!! Brandon Duckworth Naturally will pitch for the Red Sox, Pedro Villarreal for the Bats.

Great to be back, now let's push hard through ASB.
Posted by Jenks at 11:19 AM