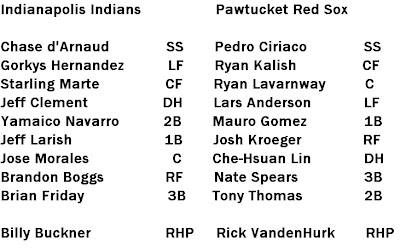 Buckner pitched four innings, giving up four runs on seven hits. Better luck next time, kid. Buckner had three walks and three K's during his brief appearance. His ERA is currently 9.00, but there's a little time to work on that.

Buckner's junk drawer relief included Tony Pena Jr (And if you guessed that Pena gave up the fifth run, DING DING DING!!), Junichi Tazawa, Will Inman, Garrett Mock, Mark Melancon, and Travis Hughes. Okay, maybe not the last one. Melancon got the save, because he's so big and strong.

Starter for the Indianapolis Indians was Rick VandenHurk, who's been around a bit and perhaps slept with a lady. Sorry, it's actually van den Hurk. Whatever, he pitched five innings and gave up five runs. Bryan Morris pitched the final three innings and took home the loss. To his wife, who was up late doing the laundry she sometimes takes in to make a little extra money. Cheer up, Bryan.

You may be surprised to find that the Indians scored hard and fast before Pawtucket did. Top of the first, leadoff batter and shortstop and chocolatier Chase d'Arnaud hit a home run off Buckner. A couple of doubles and a walk later, you had Indianapolis up 3-0.

Third baseman Nate Spears led off the third inning with a walk. That's all I wanted to tell you because I love it when Nate Spears walks. Okay, but there's more: Spears to second on a wild pitch, then he stole third. Ryan Kalish walked and then Lavarnway was batting and got on base thanks to an error... An error which also scored Spears and Kalish! 3-2!!

Both teams picked up a run in the fourth inning, making the score 4-3. Top of the fifth, right fielder and recreational rosin user Brandon Boggs hit an RBI double. 5-3! But the Red Sox tied it, wanna know how? Local housewife had one weird old trick! Additionally, Ryan Kalish and Ryan Lavarnway hit back-to-back solo homers. That is because Kalish is a champion. He even willed Lavarnway's homer into existence from the dugout!

And so the game was tied for a while. Bottom of the eighth, Che-Hsuan Lin hit an RBI single. Thanks for this. 6-5 Pawtucket and Melancon put a stamp on it.

the indians stole a few bases:
1. Indianapolis stole eight bases, most of them off Buckner. Blame defensive liability Ryan Lavarnway.

2. By the way, the Pawtucket paper is still covering the Pawsox, except it doesn't seem to be available on line. You have to buy the newspaper, perhaps out of a box you put change into.

3. Speaking of which, here's a Mark Prior story that may look good in your portfolio as you look for a job at a better newspaper.

4. "In the 8th, though, a d'Arnaud error put Laaaaarrrrrssss on first to lead off the inning and a Jose Morales wild throw sent him to third. From there he scored the eventual winning run. Gorkys Hernandez went 2-3 with two doubles and two walks. Clement finished 2-4. D'Arnaud made four outs after the HR and left six runners on base. I blame Neal Huntington for the loss for not trading for Laaaaaarrrrssss." - WTM on Bucs Dugout. The Pirates wanted Lars Anderson?

5. I WAS TOLD THAT JEFF KARSTENS WOULD BE PITCHING!!

6. Here's a little something about Che-Hsuan Lin. It's not in English, but have at it, polyglots.

TONIGHT!!! Brandon Duckworth will take on skinny boy Jeff Locke. I am pretty sure I won't be going, as I have a standing engagement on Thursday nights. I TOLD YOU THIS BEFORE. But you go, really, and say hello to all the kidz for me.