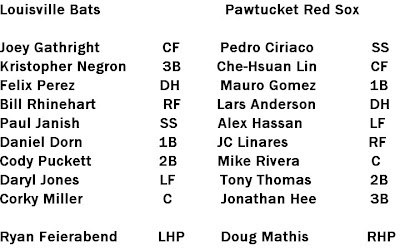 Louisville Bats once again outdo Pawtucket, taking it 2-0 and laughing all the way. Ryan Feierabend who, oh, may have pitched at McCoy once or twice, got the win for being awesome and sexy and having stamina... IN BED.

Starter for the Pawtucket Red Sox, or the "P-Sox", was Doug Mathis. I have alleged that Mathis possesses a certain suckiness of pitching ability, but I put all that behind me and now I have only the most solicitous and tender feelings toward Doug. Mathis pitched six innings, letting Louisville hit him five times and walking four of 'em. Six bats K'd against Mathis, so that was good. But he gave up two runs, which is two runs more than Pawtucket scored so I hope he gave them what for after the game, especially those bums Lin and Anderson. WHAT, NO HITS TODAY, YOU GUYS?

Ryan Feierabend, or 'Bendy', as he likes to be called, went seven innings, topping off at 95 pitches. If I thought he was a hottie, I might call him "Feierabend Me Over!" He doesn't really pronounce his name that way, though. It's more like Ryan Ferbin'. The Red Sox only managed one lousy hit off him, and guess who that was? No, not Mike Rivera. No, not Alex Hassan, who says shit like "someone threw a rock and crackee my back windshield while we were on roadtrip...bs man!". No, not horse tranquilizers. It was, of course, Mauro Gomez. How could you not guess Gomez? I mean, he's like their best hitter. You're stupid.

Daniel Bard and Junichi Tazawa combined to pitchzzzzzzzzzzzz. Bard was all over the place, of course, with three walks and a wild pitch and only 16 of his 36 pitches were for strikes. Good work, kid. You'll be back in Boston in no time. JJ Hoover and Donnie Joseph provided exquisite scoreless relief for the Bats.

2. How come only two umpires are listed for this game? Seth Buckminster, Adam Hamari, and nobody.

3. No, really, for real, seriously, what is wrong with Daniel Bard? Did he hurt himself? Has anyone said for sure what it is and I missed it? Is it bath salts? It's bath salts, isn't it.

4. It was Feierabend's first win of the season. which he started in the Indy leagues. Please enjoy this little story and the accompanying picture of Feierabend as a check-bouncer.

TONIGHT! Pawtucket tries not to get swept again and lose their eighth in a row. Or maybe they won't really try that hard, who knows? Daniel Bard is sucking their will to live. Justin Germano will pitch and Chad Reineke will pitch and we shall see who the real man is. I will attend. In my pajamas.