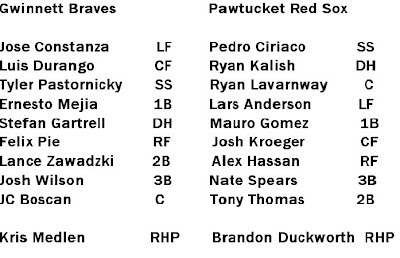 Pawtucket somehow manages to win, 4-1. The pitchers should all chip in and buy a bouquet for Mauro Gomez, who stood out in the rain last night.

Pawtucket starter Brandon Duckworth was throwing a lot of mush last night, but worked it out through 5 2/3 innings. In the early innings, he just kept putting people on base, giving up hits and walking people, then wriggling out of it. Right fielder Felix Pie led the second inning off with a double and then later scored on a single by third baseman Josh Wilson. So is that the same Josh Wilson who was on the PawSox for like five minutes back in... 2007? Well, it was 2008, but yeah.

So Duckworth didn't get the win. It was reliever Alex Wilson, who stepped into the sixth inning after Duckworth's departure. Wilson went on to pitch the seventh inning as well, giving up one hit and no runs, obviously. And then you should have seen Mark Prior in the eighth inning. Yuck! Prior's first obstacle was Felix Pie, so he hit him with a pitch. Pie stole second and scooted over to third on a wild pitch. Prior struck out second baseman Lance Zawadzki, walked Wilson, struck out the catcher, Boscan, walked LF Jose Constanza, then struck out Luis Durango to end the inning. I truly thought Prior was going to walk in a run, as he kept getting up to 3-0 on like every batter, but WTF. Durango struck out looking. Only took Prior 33 pitches!

Junichi Tazawa also struggled to throw strikes in the ninth, but got the save for the Red Sox. By that point, it was wet and the park was empty and some fans were getting vocal and it was after ten and no one cared.

Starting pitcher for the Gwinnett Braves was Kris Medlen, who's rehabbing and says shit like "dude absolutely rakes!! More contact than Hessman though. More pop than Barbaro Canazares. Glove.... Improving. :)". (Medlen is talking about big, sexy first baseman Ernesto Mejia, although I don't take kindly to the poke at HESSMANIA!) (Also, Medlen didn't really say anything too dumb, so I kind of dig him!) Medlen doesn't look like much, but in spite of the end result, I think he pitched rather well!

So remember how the Braves scored a run off Duckworth in the second? Felix Pie, remember? Well, Pawtucket immediately tied it in the bottom of the second by way of a ground ball out with a runner on third. Boring, but there it is. The Red Sox didn't score again until the sixth inning. Left fielder Lars Anderson singled and moved to second on a wild pitch and then Mauro Gomez said, here, let me help you with that, and SHAPOW! Home run like nothing. Two more runs, 3-1. I guess when Medlen hit him in the fourth, he predicted this.

And in case your heart isn't full enough, in Gomez' next at-bat he hit another home run. Against his former team! And that is why Hyder chose Gomez to interview for his post-game dish on the field. Gomez used a translator, which I have a feeling he might not have needed, but sometimes we all need those training wheels. I certainly did when I spent my winter in Venezuela being awesome and a local celebrity and an MVP with a catchy nickname!

and now mark melancon is gone and i hate everything:
1. I like Tazawa but he is no Melancon. God, this is going to suck without him.

2. No hits and three K's for Ryan Kalish and I'm sure he felt every inch of it. And no hits for Lavarnway. Pedro Ciriaco had a tough night as well, getting picked off or caught stealing every time he got on base. Maybe I should tip my cap to JC Boscan, who just returned from Atlanta where he was filling in for Brian McCann. In the bedroom, with McCann's wife! ZING!

3. I guess Kris Medlen had a blog?

5. Okay, so Kris Medlen is being converted from a reliever to a starter. I learn so much when I do this.

6. Where the hell has Peter Gobis been? Here he discusses Lars Anderson with a few game details. I will add that when I hear fans talking about Anderson in the seats around me at McCoy, they have essentially given up on him. And I don't know anything, but it has to be a serious bummer for Anderson... Kind of in a slump right now and getting stuck out in left field... He looked miserable out there in the rain last night. Anderson was replaced by Hassan in the ninth, though, in what was probably a defensive change.

7. And where is Kevin Pereira?

8. From SoxProspects.com: "Most of the AAA bullpen is too dominant for AAA: Tazawa, Wilson, Mortensen, Mock. I don't like the front office's "if it ain't broke, don't fix it" approach to all the fringy guys in the bullpen. I'm much more in favor of a "quit while you're ahead" approach." - Posted before the game by 'Yirmiyahu'.

TONIGHT! No game, nothing. But then Pawtucket goes to Buffalo to face the Mighty Matt Harvey. Doug Mathis will attempt to retain some dignity in the Empire State.