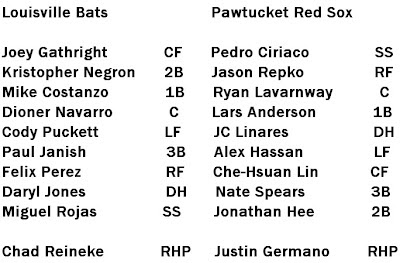 Louisville completes the sweep, in spite of being one of the homeliest teams in the IL. 6-3 Bats with the win going to tall, tall Chad Reineke and the L is all for Justin Germano, who had an off night.

Germano was ridden like a rented mule, throwing 103 pitches through seven innings and giving up two home runs at various times. Why is it only Germano that goes that deeply? Why not annihilate Tony Pena's arm or something? I guess they want him to be ready... Ready for BIG LEAGUE BALL. At any rate, four runs and eight hits and a couple of walks were charged to JG. His seventh inning was strong, with two strikeouts and a groundout, but overall it was a rough ride.

Reineke, who says shit like "Happy #Easter everyone. Thank you Jesus for being my Lord and Savior.", pitched 6 2/3 innings and Pawtucket popped out three runs against him. He struck 'em out four times, too. But at first, it looked like it would not be Chad Reineke's night. First batter he faced, Pedro Ciriaco, doubled and then scored on a single by R. Lavarnway. And then in the third inning, second baseman Jonathan Hee led off with a double and Ciriaco tripled him in. A triple! 3-1... For now.

The Bats came flapping back in the top of the fourth, thanks to a homer, a couple of singles, and a double... Tie game after all of that. Pawtucket didn't score after that. And I will tell you why: Mauro Gomez did not play. Mauro Gomez would have said, Pardon me, but let's fuck this shit up. What did Lars Anderson even contribute? And the DH, JC Linares... No hits from him, but I can overlook that for many reasons. WHY NO MAURO GOMEZ?

And not even Josh Kroeger! Did he play the other day? Is he injured? Does his foot hurt and he had to go to the nurse? I just feel like Germano kept the team in the game, but there was minimal production from key hitters.

Alex Wilson pitched the last couple of innings and continues to be unimpressive as a reliever. I guess that's why he's here, to work it all out. Good luck with that.

jonathan hee has some defensive shortcomings:
1. I like how Jason Repko plays. He's pretty balls-out. You can tell he wants to be in the big leagues wicked bad. He made a splendid diving catch in the eighth inning, too.

3. "Again the deep counts, putting runners on base, they got some two-out hits, they got to him," said Beyeler of Germano. "He didn't pitch that bad, he kept us in the game, we have to swing the bats a little bit better." - Well, well, well, well, well. Arnie Beyeler also agrees with me, according to Peter Gobis.

4. More from Gobis: "Oddly enough, Germano has allowed more HR's than walks (13) over the 97 innings that he has pitched in his first season since coming over from Cleveland as a free agent signee." By the way, Gobis, it's Miguel ROJAS... Not Soto.

5. "The Bats are on a tear right now, winning their 8th straight last night, their 9th of the last 10 games. Felix Perez had a nice day at the office, going 3-4 with a django and a double. Chad Reineke did what was asked of him, but not much more, going 6.2 IP with 3 ER, 4 K, and 2 BB. Jordan Smith and his ears got the save." - Thank you, ManBearPig!

6. Okay, I have a Louisville story: A couple of yrs ago I went to Louisville. I did all the things. There were not that many things, but that's okay. Anyway, on my last day we were hopping the shuttle to the airport and the driver said, Do you mind if I pick these guys up?

Well, I have to tell you that the hotel was like two towers and they were across the road from each other. So the guys he wanted to pick up were in front of the other tower and they were a bunch of PawSox players. HA! Aaron Bates was there... And Dusty Brown.. And Josh Reddick and Lars Anderson and I think Jorge Jimenez... Anyway, yeah. Dan Hoard came along and sat next to me. I was trying so hard not to laugh. The players were just yammering about crap they saw on YouTube and so forth. Truly, the height of wit.

The shuttle took us to the Baseball Bat Factory. Niuman Romero was waiting outside and one of the guys said, "What, did he walk?!" Incredulous. The Factory was like two blocks away. Good for you, Niuman Romero.

TONIGHT! New kid in town, Columbus Clippers. Matt Zaleski will try and keep the PawSox in the gutter. Billy Buckner will probably not help matters, but we'll see.
Posted by Jenks at 11:05 AM