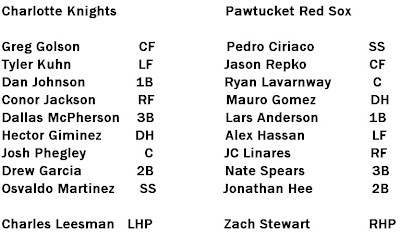 Pawtucket wins at last, 5-1, with new kid Zach Stewart making a nice first impression. Also Mauro Gomez was there making his usual contributions, which I will get to later. Here's a hint: SHAPOW!

Stewart pitched 5 2/3 innings and gave up one run, which was a... It was an RBI single? It was! It was an RBI single by Dallas McPherson, who is not quite dead yet. I know, I looked it up. I also know his middle name is Lyle and that he attended The Citadel. Damn, McPherson. But yeah, Stewart did not allow a run until the sixth, but then three singles in that fateful inning ended his night on the hill.

Starter for the Knights was Zach Segovia. No. Dylan Owen? JB Miadich? NO MIADICH WAS A RELIEVER. It was lefty Charles Leesman and his crappy little five innings. Leesman got the Red Sox out pretty well in the first, but in the second inning Alex Hassan hit an RBI single to put Pawtucket up 1-0.

In the third inning, with two outs, Jason Repko singled rather cheaply to second. Ryan Lavarnway singled right after that, but just to be a dick he hit a line drive to right. RYAN LAVARNWAY LIKES COUNTRY MUSIC!!!!! So who bats after Lavarnway? Mauro Gomez is who, and all he did was hit a timely home run to slap three more runs on the board. I like this guy.

Daniel Bard and Garrett Mock finished the game off, providing a happy ending for all in attendance. Do you find Garrett Mock attractive at all? He's a big guy... Fireballer Brian Osso Buco was the last guy to pitch for the Knights. The end!

fine, brian omogrosso:
1. Lavarnway went 3-4 and JC Linares was the only guy in the lineup without a hit.

3. And look who's going for Pawtucket: Lavarnway, Ciriaco, Gomez, and Justin Germano. WHAT, NO TONY PENA AND HIS WEIRD MUSTACHE THAT MAKES HIM LOOK LIKE HIS DAD?!

4. Charles Leesman used to play for the Cincinnati Steam, which is not a minor league hockey team.