There are several players on the Gwinnett Braves that I have never heard of. 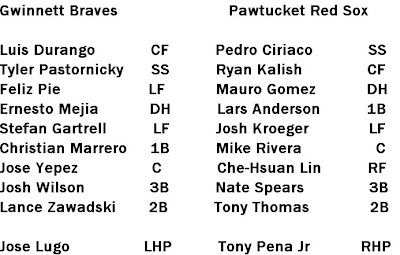 Braves win, 5-4. Win goes to Jose Lugo, of the Richmond Lugos. Tony Pena takes the loss, accompanied by some sad, walking away music.

Pena pitched five innings and gave up two runs. Well, at least he held out until the fifth inning, when Braves CF Luis Durango hit a two-run single. Pawtucket relievers Junichi Tazawa and Garrett Mock each pitched a pair of innings, with Tazawa giving up one run and Mock giving up two. Each of those guys were attacked by a home run. And here it comes... can't you feel it baby?

Lefty Jose Lugo held Pawtucket down until the sixth inning, but was no match for the mighty Ryan Kalish, who hit a fly ball to center that just kept going... Home run! I guess you had to be there. Ryan Kalish is so happy, you guys. And everybody wants to be around him! At this point, Kalish could sell whiskey... I'd buy it. I'm buying what he's selling. What I am saying is that I want to have sex with Ryan Kalish.

The Red Sox scored a second run in the eighth inning when first left basefielder Lars Anderson hit an RBI double. Perhaps he had a therapy session? CLEAR YOUR INSTRUMENT, ANDERSON. Mauro Gomez had singled, so good fucking thing. I like Mauro Gomez.

Top o' the ninth, Gwinnett scored a couple more runs. Pawtucket was chasing them at the bottom of the ninth, when reliever Cory Gearrin, who says shit like ""LORD, you alone are my inheritance, my cup of blessing..." ~Psalm 16:5", led things off by hitting Mike Rivera with a pitch. WHAAAAAATTT?!?!? Yes, that really happened. And then later in the inning Pedro Ciriaco batted Rivera in and Kalish batted Ciriaco in. But that last tying run proved elusive, and the Braves held on to win 5-4. And also, I love Pedro Ciriaco the most on the PawSox. He is my favorite. Don't even talk to me about his K rate, okay? In my imagination we are friends and we go ride the carousel in Westerly.

3. Please read Hyder's Kalish story, because you will love it.

4. Here's one for the ladies: Ryan Kalish getting a haircut.

TONIGHT! Todd Redmond v Justin Germano. Or this afternoon, what day is it? I would to stay and chat, but... Sundays are tough.
Posted by Jenks at 9:05 AM