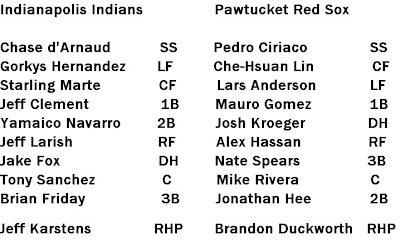 Red Sox snag another one, 5-3. Righty Brandon Duckworth had a great start, going six innings and giving up three runs (one unearned) on four hits. Duckworth doled out two walks, but he struck out eight batters, which has to be a season high for him. The win deservedly goes to him.

And then there's Maude: Jeff Karstens and his final rehab start. Karstens pitched four and a third and was feelin' alright as far as getting outs. But in the fifth inning, after giving up a couple of hits with one out, Karstens was removed from the game due to tightness in his right groin. All one can really say is 'D'oh.'

The Indians were looking good, initially. They put up their first run in the second when big boy Jeff Clement and former PawSox great Yamaico Navarro hit back-to-back doubles. Production from the infield, who doesn't love that? And then in the top of the third, with one out, shortstop and cutie-pie of renown Chase d'Arnaud hit a single. D'Arnaud went ahead and stole second, then advanced to third when Pedro Ciriaco missed a catch at short. D'Arnaud managed to score when LF Gorkys Hernandez grounded out. 2-0 Indianapolis!

Top o' the fifth! Indians DH Jake Fox led the inning off with a walk. Catcher Tony Sanchez followed that ish up with a line drive to left, moving Fox over to third with no one out. D'Arnaud hit a fly ball to center, allowing Fox to score. 3-0. Uh-oh, you guys.

Hang on. Bottom half of the fifth. Karstens still in, and I wonder how his groin was at that point? Had it been sore since the first or did it just happen suddenly? Did he think he could pitch through it but it became steadily more uncomfortable? You can't even touch it, because the trainers notice when you're, say, wincing and grabbing parts of your body. Anyhoo, Mauro Gomez struck out looking, then Josh Kroeger doubled. Kroeger would then score on a single by Alex Hassan. And that was it for Karstnes. Kasrtens. KARSTENS!! Consarn it, why is his name so hard to type?

New pitcher, Duke Welker. Catchy name, Phil. Welker is wicked tall and says shit like "Thank you Lord for Dying on the Cross!! and thank you for Skype!!!" Welker gave up back-to-back singles to Nate Spears and Mike Rivera, scoring Hassan. HERE COME THE PAWTUCKETS!! 3-2 after five.

Bottom of the sixth, Welker still going at it. He walked left fielder Lars Anderson with one out, then hit Mauro Gomez with a pitch. On purpose, right? Well joke's on you, sucka, because porn-loving Josh Kroeger hit a three-run homer. 5-3 is your final score.

Is that all? No, Evan Meek pitched a little bit for Indianapolis. I love that guy! For the Red Sox, we saw Clayton Mortensen do some middle relief, and King of the Bullpen Mark Melancon close it out and get the save. His eleventh save. God bless you, you nutty Texan.

two things:
1. The general consensus around the internet is that Melancon srsly needs to return to Boston. Is there such a thing as internet consensus? I like to think so.

4. "Even with a protracted wait to perk up and without the services of the two radiant Ryans, the patient Pawtucket Red Sox found a way to end Brandon Duckworth’s winless skid. " - Providence Sports Scribe. Never change, Al Daniel. Ever.

5. I never noticed this PawSox coverage before, but here's "kturner" on Rhody News.

6. Here's a very nice story on Brandon Duckworth. Please not that it is not a local source, because all the sportswriters around here have their heads up their asses and don't chase after any good stories or profile players who aren't ranked prospects. Except me. And maybe sometimes Hyder and McGair.

7. I just wanna give a big shoutout to Pittsburgh Pirates bloggers. Whenever Pawtucket plays Indianapolis, I know I can depend on them for info, reaction, analysis. They are so informed and passionate and get zero credit from other cities' sports fans. Thanks so much, you guys.

TONIGHT! Daniel Bard v Jeff Locke. By the way, I had a killer time in Lehigh Valley. I promise to reveal all secrets soon. But now I have to go so buh bye.
Posted by Jenks at 11:01 AM