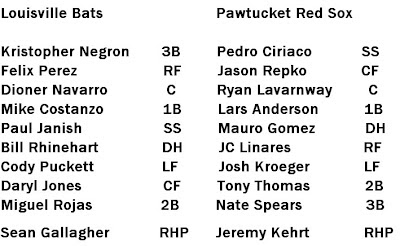 Wooden bats at the stadium, very free. Louisville wins again, Pawtucket's staggering and reeling in the ring after losing six in a row. The Bats got 16 hits, took the game 7-5, and then danced with Pawtucket's dates. Eff you, Red Sox. Pitch better!

Starter for Pawtucket was Jeremy Kehrt. Kehrt pitched four innings and Kehrt gave up four runs. One of them was Paul Janish hitting a home run. The Bats racked up four doubles as well while Kehrt was strutting around on the hill. Oh, dear.

Sean Gallagher was the man for Louisville and he pitched six innings and the Red Sox tickled four runs out of him. Gallagher is from Boston, so he must be an asshole, right? Pedro Ciriaco led off the bottom of the first with a double, which is one of my favorite things about Ciriaco. Such a great leadoff guy. Too bad Jason Repko batted next and reached on a fielder's choice, snuffing out Ciriaco's flame. But Gallagher walked Lavarnway, which turned out nicely for Mauro Gomez, who hit a home run JUST LIKE THAT. 3-0 Pawsox.

In the top of the second, we saw Janish's home run and an RBI single by CF Daryl Jones. 3-2! Top of the third, Bats tie it by way of a sac DP (yup) by Dioner Navarro, who is doing just fine. How does Navarro look these days? Is he wicked fat?

Paul Janish came through again for Louisville with an RBI double in the fifth off Latimer. 4-3 bats. But Pedro Ciriaco led the sixth off with a single, stole second, moseyed over to third on a balk, and scored when Lavarnway hit a fly ball to left. TIE GAME.

Top of the eighth, Latimer gives up a pair of singles and gets the boot. Mock entered the game with no outs and I'm sure he was so scared. Second baseman Miguel Rojas sac bunted everyone over. Good managering, David Bell. So all Felix Perez had to do was single or something, which he did, driving in a run. Mock walked Navarro, and then first baseman Mike Costanzo hit a two-run single. Costanzo. I saw that guy play in the Eastern League All-Star game back in... 2007? It was in Norwich. The fog game with all the sailors and Sergio Santos winning the Home Run Derby and Charlie Zink was there. No, I didn't dream it and no I wasn't high or anything. And then the fire alarms started going off...

Anyhoo, Costanzo tried to make it over to second, but JC Linares hucked the ball in to Anderson, who was covering. OUT!!!

Oh, wait, one more run. Anderson hit an RBI double in the bottom of the eighth. Guess who he drove in? PEDRO CIRIACO. That motherfucker. 3-4 last night. Incredible.

Pawtucket got a couple of dudes on base in the ninth, but Tony Thomas grounded into a double play. Not really his fault. It's all on the pitching. Jordan Smith, who says shit like "At the airport talking to the guy who came up with the invention to make the mountains turn blue on the Coors Light bottles!!", got the save.

No notes today. Information and anecdotes about this game were scarce.

Doug Mathis goes this afternoon for the Red Sox, Ryan Feierabend for Louisville. Let me know how it turns out!
Posted by Jenks at 9:14 AM