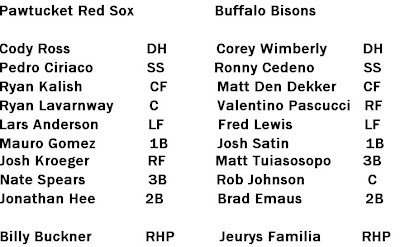 Pawtucket Red Sox once again prove there is nothing you can possess which they cannot take away. 8-5, Buffalo Bisons laid low again. Starter Billy Buckner gets his first win, so throw some confetti into his FACE!

Buckner pitched five innings and gave up five runs on seven hits. Not that great of a start. In fact, wasn't there anyone else in Portland they wanted to take a look at? I'M PRETTY SURE THERE IS.

Buffalo starter Jeurys Familia pitched four innings and started the fifth but ran into some trouble at the border. Familia coughed up five hits, but it was probably the six walks that led to his removal. Yeah, 86 pitches, only 46 strikes.

Buffalo left fielder Fred Lewis (Fred?) hit an RBI single in the first inning to put the Bisons up 1-0. The rehabbing Cody Ross, who was on the 2010 World Series Champion SF Giants and was nearly as valuable as Edgar Rentaria, helpfully singled at the top of the third, but was quickly deleted as a baserunner by Pedro Ciriaco's frce out ground ball. Rats! But no te llores, Compostelana: Ciriaco stole second and scored when Ryan Lavarnway singled. TIE GAME! TIE GAME! TIE GAME!

Uh-oh, bottom of the fourth! Buffalo bites back!! Fred Lewis tripled with one out! Is Fred Lewis hot? Hard to be a hottie when your name is Fred these days, but who knows. First baseman Josh Satin drove Fred home with a single, because Josh Satin is allegedly strong. It's in the eyebrows. A single and a walk loaded the bases up. And then a sac fly and a two run single led to a four-run inning. 5-2. 5-3? No, 5-2, cool.

The Red Sox put runners on the corners in the fifth inning, knocking Jeurys Familia out of the game. Josh Edgin, who says shit like "Waiting for @ETurg38 to come back and fluff my pillow before we get to far into this 7 hr roadtrip", entered the ColaDome to face Anderson. Anderson grounded out, but the runner scored from third. 5-3.

I suppose I need to address the sixth inning, although I am short on time. Nate Spears led off with a double. Jonathan Hee walked, Cody Ross grounded into a force and discoed over to first base. New pitcher for Buffalo, Pedro Beato. Bisons manager Wally Backman was ejected, and I believe it was over whether Josh Satin tagged Ross or not. Satin says he tagged him. But then i am not even certain this really happened, but Backman go kicked out.

Okay, yeah, that's what happened according to the Buffalo paper: "The Bisons had a 5-3 lead in the sixth and Backman’s blowup came after Cody Ross, down on injury rehab from Boston, was ruled safe at first base on the back end of a double-play attempt. Brad Emaus’ relay throw was wide and Ross tried to elude Satin’s swipe tag. Ascani ruled the runner safe and Backman immediately threw his cap down at the top step of the dugout."

Pedro Ciriaco hit a line drive single to right and damn, he's hitting lately! Spears scores, Ross to second and replaced by Alex Hassan. Alex Hassan is so boring. Kalish reached on an error to load the bases for... Lavarnway. Wild pitch, Hassan scores, Lavarnway doubles, two more runs score, Lavarnway to third on an error by Fred Lewis. Do it to me... Fred. You're an animal... Fred. Ride me, Big... Fred.

And then Anderson hit an RBI single. No more runs scored, thank you. Pawtucket relievers consisted of Junichi Tazawa and his three innings of lightness and being, and Mark Prior, who is no Mark Melancon.

we all come from unloving homes:
1. I just looked it up and Fred Lewis is actually pretty cute. Sorry, Fred.

2. Mauro Gomez, no hits and two strikeouts. "It's okay, you're still awesome!"

3. “I got four kids and I bet my kids’ life the guy was out,” Backman said. “All I did was ask for help, told him there was no way I was leaving here until he asked for help. He wouldn’t ask for help. That’s why you have three umpires: To be able to get together and get the play right. He got the play wrong.” - Mike Harrington! Terrific! Can I just say that it's pretty weak that there's no local coverage for Pawtucket away games? LET ME DO IT.

4. "The Bisons might have thought it was there night after Jeurys Familia walked the bases loaded in the second and got out of it with a pop-up and a 6-4-3. They would have been wrong. The wheels came off shortly after, as Familia struggled to find the plate all night, and a blown call on a double play in the sixth led to a five-run rally for the PawSox. Familia is a mess right now and has walked 44 batters in 64 AAA innings. Ungood." - from Amazin' Avenue, which is... Amazin'.

5. "Watching Familia pitch is frustrating. He walks guys when he gets ahead in the count 0-2. He walks guys when he falls behind 3-0. He was throwing hard enough, but just can’t find the strike zone consistently enough. He induced a pair of double-plays which helped limit the damage against him. His curveball induced weak contact and groundballs all night. In 60 innings this year, he’s fanned 60 and walked 38." - from Toby Hyde's Mets Minor League Blog.

6. "Another questionable start for Jeurys Familia… tonight just didn’t work for him and, frankly, I seem to writing about things like this too often. Tonight, it was only four innings, 86-pitchers, only 46 strikes. One, I repeat, one strikeout, and six, I repeat, six walks. Now, we can add to this a bad outing by both Josh Edgin (1.1-IP, 2-ER, 4.44) and Pedro Beato (0-2-IP, 3-R). Add to that four areas and, boy, didn’t that come to Jesus talk by Wally the night before really work?" - from Mack's Mets

This afternoon, oh my lord it's Duckworth again! Garrett Olson will face Pedro Ciriaco and co. You like that? I'll bet you love it...

I may swing by tomorrow, but it's the morning of my big trip so... we'll see how I feel when my alarm goes off. BYE.
Posted by Jenks at 9:35 AM