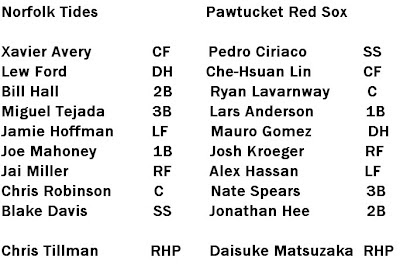 Suddenly Chris Tillman got 80% more attractive. 2-0 Norfolk Tides, with Tillman pitching eight one-hit innings and striking out nine batters. 100 pitches for Tillman, which is a nice round number. Badass outing for this kid.

Lars Anderson got the only hit and it was a mere single. Nate Spears drew a walk. The end. JC Romero got two outs in the ninth, somehow allowing Nate Spears to get to second base... Yes, Nate Spears' hands were under Romero's shirt at the drive-in. HOTTT!

Jon Link got the last out, getting Che-Hsuan Lin to ground out.

Daisuke Matsuzaka started for Pawtucket, and he's almost as good a starter as Brandon Duckworth. In fact, the whole thing is a bummer. Do you want to see Dice-K go out like this? I don't. Has anyone done a nice Boston profile on DM? I would love a Sunday magazine story about Matsuzaka.

Matsuzaka pitched 5 1/3 and gave up a run. It was the first inning, and Lew Ford hit a solo home run. I love you, Lew Ford. Never change. Let's go sit on the hood of your car and drink beer and listen to Tesla.

Garrett Mock pitched the eighth and ninth inning without further incident. Would you hit that? W for the Tillman:
1. "And for the first time since Matsuzaka’s previous, and only, decision at the Triple-A level in 2012, namely a 5-0 loss at Durham May 17, the bat rack took a vow of silence. In the process, they treated Tides starter Chris Tillman to his longest, most efficient start of the season, his fourth in Norfolk." - Al Daniel, doing his thug thizzle.

2. “I felt good out there today", said Matsuzaka. "I didn’t have to worry about my body at all, just focused on my pitching and the competition out there.” - K Pereira. I like that he was focused on the competition. You seldom hear rehabbers talk about the actual game at hand.

Well, I looked and looked but could not find anything much about Tillman's very nice start. You guys all suck. Do you not know how to find a story? Honest to god. The bloggers need to rise up and take over sports writing and maybe inject a little zip and vim and passion. And zazz!

TONIGHT! The Pawtuckets are in Lehigh Valley, where I shall join them tomorrow. Yes, I'm going to be a reliever, hangin' in the bully with Mocky, Willy, Morty, and... Whatever stupid nickname Mark Melancon has. Former Lehigh Valley IronPig Brandon Duckworth will start for the Red Sox. Scott Elarton will oppose.

In a related story, I am souped about my trip to PA and really anticipating the fun I'll have, which in Hollywood means I'll wind up in handcuffs with a black eye at some point. And an Escape! through the swamp.