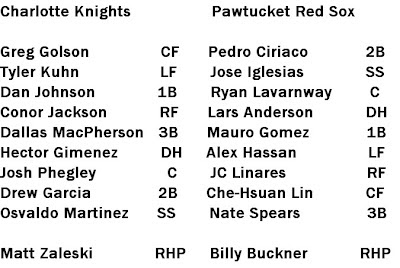 Starter for Pawtucket was Billy Buckner. Buckner gave up all the runs, including a pair of bombs, during his 4 2/3 innings. Is he ever gonna have a good start? Why did he come here? I'm not mad, it's not his fault. Just maybe people want to see better talent coming up from Portland.

Matt Zaleski threw 112 pitches! He cranked out seven innings, gave up six hits and three walks, and shut out the opposition. Only one of the hits was for extra bases, and that was a double by none other than Mauro Gomez. Take a bow, good sir. Zaleski, you, too. Good work, son.

Charlotte relievers Gregory Infante and Donnie Veal hashed out the remaining innings. Pawtucket rolled out Tony Pena for long relief, and Will Inman, who says shit like "What I have to say to a inhabitant of the Earth in 100 years is similar to what I say to the present inhabitants of Earth. To be creative.", for a nightcap. I can't be too hard on Inman, he's done a good job and I like him. I might even let him fuck my sister.

two things:
1. Conor Jackson, right field, went 3-5 with a double. Evidently, he was on the Boston Red Sox last season for a while. This is the Diamondbacks guy, right? What the hell was I doing?

2. Knights DH Hector Gimenez had four RBI, which is nice for him.

3. Jose Iglesias is back! And just when I was in the throes of Ciriaco-love at SS. And new kid Zach Stewart is in the house and I suppose is pitching for Pawtucket tonight and i am super PISSED that I cannot attend!!!!!!! Also, Josh Kroeger's on the inactive list. Because he's... Inactive? Dancin', prancin' Jeremy Kehrt's back in Maine. The ladies love him there, it is told.

4. "Perhaps Stewart can work a little mound magic for the PawSox, who suffered their ninth straight setback, 8-0 to the Knights Tuesday." - Peter Gobis! Check out his great story, why don't you?

5. Paul Kenyon packs a lot of information into one story, makes a pair of little typos.

6. "Doug Mathis (5-5, 3.94) will take on an unknown Knight on Friday at 7:05." Jon Baker, Pawtucket. An unknown Knight? Sounds like a steamy paperback. Will Mathis be wearing a corset?

7. Matt Zaleski has a pitching clinic in Indiana, as revealed by a warm human interest story.

8. This is a little late, but Tara Franey attended the same Pawtucket/Louisville game that I did on Monday. Everybody loves Corky Miller.

Esta bien, entonces. Tonight we have for you a ragout of Zach Stewart, topped with shaved cremini mushrooms. Charles Leesman goes for Charlotte. Charles? Okay.
Posted by Jenks at 10:25 AM