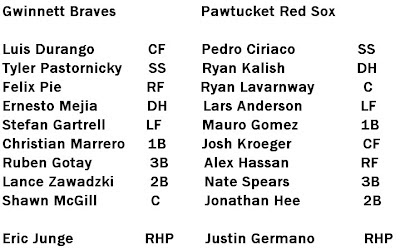 Well, well, well, Justin Germano. Your entire season has been leading up to this. Pawtucket wins 6-1 and Germano pitches a complete game. 108 pitches, 70 for strikes, 13 ground ball outs, seven flyouts, 4 K's, 2 BBs, three hits and one earned run. The game was only two hours and 26 minutes long. And if you were there, you are so lucky.

Opposing pitcher was righty Eric Junge. Junge pitched 6 2/3 innings and gave up six runs on eight hits and wore his loss like a crown of thorns. Reliever Jaye Chapman, who says shit like "you should ask yourself what in life are you missing that money can bring you", pitched the remainder of the game and allowed no further runs.

The Braves actually scored first, when Ernesto Mejia (the rather ruggedly handsome first baseman) hit a solo home run in the second inning. And then the score was 1-0 forever and Pawtucket was like, DAAAGHGG HULK NOT DRIVE RUNNERS IN! That is, until inning seven, when everything exploded all over your FACE! Left fielder Lars Anderson led off with a single, then our dear friend Mauro Gomez doubled to put runners at the corners for big, strong, mean, dirty, Josh Kroeger. Which could have been cool, except Kroeger got IBB'd to load the bases. But then Junge walked Alex Hassan, scoring Anderson, which was perhaps not his desired result.

Third baseman Nate Spears was next, and he hit a two-run single. Spears reached second base on a throwing error by Stefan Gartrell. And no wonder: Gartrell's long shirt sleeve must have been a real impediment. And then the greatest thing happened: Jonathan Hee tripled! Two more runs scored. Ryan Kalish later hit a ground ball to score Hee, adding the sixth run. All in one inning, like a nice neat little package.

No hits last night for Ryan Kalish, but we still love him, don't we?

2. This one time Eric Junge had an astronaut experience with Kevin Millwood.

TONIGHT! Yohan Flande will hopefully flambe Daniel Bard (sorry). No, I still want Pawtucket to win... I just want Bard to get racked. Is that wrong?
Posted by Jenks at 11:11 AM