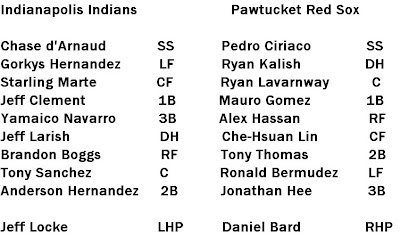 Indianapolis avoids the sweep and wins 8-6 in 13 innings. I'm still not sure how I feel about Aaron Goldsmith. But I know I like Adam Goldberg! The win goes to... You know what, who cares?

Starter for the Indians is New England kid Jeff Locke. You may remember my Jeff Locke story from last year. Oh, who am I kidding? You have no idea. Locke pitched five innings and gave up three runs on four hits. He struck out seven batters, too, if you can believe it. Locke gave up a home run to Mauro Gomez, but lots of guys do that so we won't excoriate him for that.

Starter for Pawtucket was this Daniel Bard character. Poor Daniel Bard. I feel so bad about his struggles. NOT! Sorry, I have a hard time sympathizing, as I have real world problems like 'paying my bills' and 'having a shitty job' and 'living in a bankrupt city'. Bard gave up three runs, so WELCOME BACK TO THE IL, KID.

Do I need to break it down for you? I do? Okay, but fair warning: Doug Mathis figures prominently. Doin' it right, taking me through the night, Mark Melancon! So first inning, first half, first batter, Chase d'Arnaud, brother of Travis, guy who says shit like "My name is a verb, noun, bank, and lounge chair lol", Chase gets hit by a pitch. HA! D'Arnaud stole second base, which worked out well because Gorkys Hernandez singled, placing d'Arnaud at third. And then... Bard hit Starling Marte with a pitch. A force out scored d'Aranud, then Jeff Larish hit a two-run double to make it 3-0.

Top of the third and it's Doug Mathis' gig now. RF Brandon Boggs hits an RBI single. 4-0! However, the bottom of the third was when Gomez hit his home run and it was a big one: Two runners on base so's he could rack up three runs. 4-3!

Bottom of the sixth, reliever Evan Meek came in for Locke. Tony Thomas hit a solo home run off him, tying the game and delighting the fans. The kids love Tony Thomas. 4-4 after six innings!

Uh-oh, though. Yamaico Navarro hit a solo homer in the top of the seventh. Indians up 5-4.

At this point you are possibly wondering where Lars Anderson, Nate Spears. and Josh Kroeger were. Well, I believe that Anderson is struggling and got the night off. Spears and Kroeger, however, came into the game in the eighth inning because all of a sudden everybody wants to win. The numbers tell us that never happened, but Pawtucket did tie it up in the bottom of the ninth when Ciriaco and Lavarnway both doubled in some combination, scoring a fifth run for the Red Sox.

Extra innings! Here's a quick breeze through some stuff that happened: Mark Prior pitched, Che-Hsuan Lin hit two triples (!!!!!), Tony Thomas was intentionally walked (flattering), Will Inman pitched, Jeff Larish got ejected after striking out looking, the Indians and the Red Sox each scored a run in the twelfth, Kroeger failed at a stolen base attempt, and IT'S THE TOP OF THE THIRTEENTH INNING AND EVERYTHING GOES KERFLOOEY!

Loss goes to Will Inman. Sorry about that.

2. Alex Wilson also pitched. He is not at all fat.

3. Off topic, but did you see this story about Anderson giving away a vacation to a woman in a supermarket? WTF. All I could think was... If I were shopping and I noticed Lars Anderson walking toward me, I would very calmly abandon my carriage in the aisle and walk out the door. This is because I've always been paranoid that a player is going to have a beef with something I've said and will attack me in some way. Which is ludicrous, because I am so sure they give a crap. But still. I get paranoid.

5. Eff you, Napoleon Bardamite: "The best thing about throwing down here (in the minors) is that you can kind of throw out the results and not worry about wins and losses too much." I'm sure the guys who have been in Pawtucket this whole time really appreciate your disregard.

6. Here are the lyrics to 'Riders on the Storm':

7. John Rooke mentions some stuff that happens with the PawSox in an article reminiscent of
Mark Patinken. Except way better, because can we kill Mark Patinken already?

8. Why are you reading this when you could be reading Al Daniel: Providence Sports Scribe? "Despite pitching six times as many innings as Bard, Mathis tamed the Tribe much more proficiently. Even as he elevated his single-night pitch count to an easy season-high of 105, Mathis finished strong by striking out three of four batters in the seventh."

TONIGHT. Gwinnett Braves are in town featuring Julio Teheran! Tony Pena opposes, will likely go down in flames. I'll toss some gas on him!