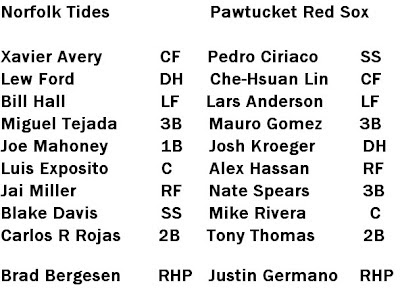 Pawtucket wins 3-2. Justin Germano pitched seven two-run innings and the win is his. Tossed 90 pitches. Struck out four. And, yeah, the two runs were solo homers. I have a weird feeling that Germano is leaving Pawtucket soon. Called up or traded. Or livin' his dream as a boxcar hobo.

Starter for Norfolk is Brad Bergesen. Pawtucket got seven hits off Bergesen, most notably in the form of two doubles by Mauro Gomez. They were back-to-back doubles, too, so how impressive is that? What? Impossible you say? Okay, what really happened is Gomez doubled at the bottom of the fourth inning then scored on a sac fly. And then Gomez' sixth innning double was of the RBI variety. Hassan hit another sac fly in the sixth to score the final run.

The solo home runs for the Tides were Lew Ford in the first, Jai Miller in the fourth. Lew Ford, still rocking and rolling. Tony Pena Jr and Clayton Mortensen combined to hold the lead for the PawSox. Che-Hsuan Lin and Josh Kroeger also went 2-4. Game over in 2:41. Thanks for this.

no tenemos iglesias hoy:
1. Still no Jose I. Has anyone checked the diathermy machine?

2. Kevin Pereira's game story. The accompanying picture of Alex Hassan is pretty funny. His face is all scrunched up. Also, he looks like your Aunt Barbara.

3. If you like Lew Ford as much as I do, you should check out this terrific Chaz Scoggins story on Hardball Heaven.

4. "The most important day in terms of setting up a schedule is July 4. Every International League team is guaranteed a home game on either July 3 or July 4, to allow for patriotic, crowd-drawing fireworks displays. Some teams, including Norfolk, insist on a July 3 game and refuse a July 4 game because there are so many competing fireworks shows in the area. Others are less concerned. But that does mean that July 3 must be a travel day." - In case you were wondering why schedules get weird that times of year. (Datacasting in Norfolk)

Oh, okay, I guess that's it. TONIGHT! TONIGHT! How did I wind up here tonight? Daisuke Matsuzaka goes for Pawtucket, because he's on the PawSox now. Tides will counter with Chris Tillman. And then... ??? I'll probably be back tomorrow, but just a reminder, I'm going to Allentown for a few days so try not to miss me too much. While I am away, please read Voice of the Noise Nation The Horn and Bell Blog! And while I'm away, I'll write home every day.

Thanks for doing these. I always enjoy them

Have a great time in PA!