Toledo missed the boat that day they left the shack. 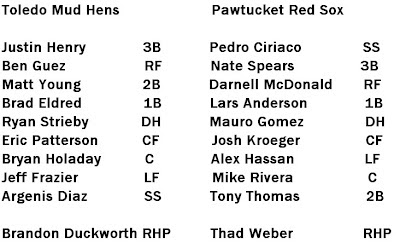 Brandon Duckworth gave up seven hits through five innings, but only two runs. He walked four batters and really, it took like 95 pitches so obviously he wasn't razor sharp. Total Duckworth start. Well, a slightly lesser version, but Duckworth just does his thing and makes it work. He's like, a stapler. But the kind of stapler you get when you order office supplies: The plain black one that can't handle too much paper.

Starter for the Mud Hens was Thad Weber, who we have seen before. Weber had a rough go of it, so much so that you really want to wrap him up and and put him in a pram and walk him through a park while the birds sing and those little propeller things fall off trees. Ah le printemps!

Weber pitched six innings and struck out six, so that was a good thing. He only walked one batter, so that was pretty good. Thad Weber has never, say, backed his huge pick-up truck over my mother in a convenience store parking lot, so that's good. He did give up five runs on seven hits, which is mildly crappy. But when you give up four home runs... That's like, Nate Cornejo bad.

So what the fuck happened? Well, Toledo scored first when Brad Eldred hit a sac fly to score Justin Henry, who'd walked like right when the game started. There was actually a flurry of baseballery in the first, with Ben Guez bunting, Matt Young singling and stealing, etc. But just that one run.

Bottom of the first, though, that's when the PawSox put their guns up. I'll bet the kids went nuts in the stands, with their hot dogs and popsicles. Awww, kids are cute. Pedro Ciriaco led off with a home run. And then Nate Spears hit a home run, because I guess he's batting second now. Nothing wrong with Iglesias, he just needed a rest. Darnell McDonald came to bat and he lined out... But Lars Anderson came up next and he, too, hit a ball out of the park. WHAT.

Weber struck out offensive threats Mauro Gomez and Josh Kroeger to end the inning, so it was just one of those weird things where the skinny boys hit homers, and the big

Duckworth gave up a couple of singles in the top of the third to put runners at the corners with no outs, but a double play was his best friend... especially since it was a 1-3-6-1-2-5 double play. Good work, infield.

Top of the fourth, Brad Eldred singles and steals a base. The steal took me by surprise, but it's Eldred's fourth of the year. Not bad for a big guy. The bases wound up loaded, then Jeff Frazier hit a line drive single to center, scoring Eldred. 4-2 Red Sox.

Top of the sixth, Clayton Mortensen in. Catcher Bryan Holaday singles with one out. Frazier doubles, line drive to left! ACTION! LET'S GO HENS! Argenis Diaz grounded out, which got Holaday across the plate. Multi-tool Justin Henry then tied the game with a line drive single to center, scoring Frazier. TIE GAME 4-4 LET'S GO HENS!

Mortensen somehow wormed his way out of the inning after that and the PawSox were nice enough to lead off the bottom of the sixth with a tie-breaking home run by Lars Anderson. Little children love Lars Anderson, mostly because he is nice but also because he looks like a cartoon character. He could be on that choo-choo train show as like, the farmer who grows railroad ties among the sunflowers. That was meant to be a compliment. I'm sure he gets mad ladies.

Two more runs left to account for, and they came in the eighth. Matt Hoffman pitching for Toledo, and once again he pissed himself. He started by walking Anderson. Anderson to second on a wild pitch. And then, after Hoffman got Gomez and Kroeger out, Alex Hassan hit a home run. What did I tell you? Crazy opposite day.

Tony Pena and Will Inman pitched the last couple of innings. Inman's gotten a lot of work lately, which is fine with me because he's been terrific. Will Inman for bullpen president!

two things:
1. Is it me or does Phil Nevin make this team switch up their positions a lot? I swear Justin Henry has played everything but catcher in this series.

2. Good game for Anderson. 3-3 with 3 RBI and a walk. Josh Kroeger struck out four times. He also loves the song 'Riders on the Storm'.

3. "I know he works hard with 'G' (hitting coach Gerald Perry) in the cage all the time and they've been working on some things. It's good to see him go out there and drive the baseball like he's capable of doing," said manager Arnie Beyeler on Anderson's performance." - KP

4. What did I tell you? "Lars Anderson and the PawSox provided plenty of fireworks of their own in a 7-4 win in front of more than 9,000 fans, their fifth win in their last six games. " - Brian MacPherson, you're better than that.

6. "Mortensen followed Junichi Tazawa as Pawtucket’s second pitcher in as many nights to record both a blown save and a win. Pena earned his first hold of the 2012 campaign while Inman earned his third save." - Al Daniel. I do so enjoy his game stories, even if they read like they were translated from Russian.

7. Wow, read this! The Mud Hens official scorer gets interviewed and it's dead brilliant. READ IT!!!

Gah, I have to have to have to go. THIS EVENING! RJ's return to McCoy with the Norfolk Tides, which you may not be able to see since it's a sold-out kinda holiday. Doug Mathis v Zach Clark. I urge you to consider popping by.