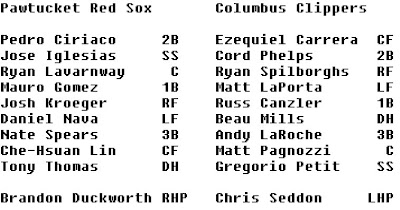 Pedro Ciriaco WINS! 6-4. Ciriaco's got some POP! He's the little infielder that could.

Brandon Duckworth got the start for Pawtucket, no decision for him as the Clippers were leading when he departed. Duckworth went five innings and gave up four runs on six hits, including three g.d. home runs. Rats! That's like going to some restaurant and you don't eat meat and there's like, nothing on the menu so you have to eat grilled cheese and french fries AGAIN.

Chris Seddon started for the Clippers. Oh, wow, he's still around? Seddon pitched seven innings and gave up four runs on five hits. Mauro Gomez got him for a homer, which is rather good news for Gomez & you.

Gomez hit his solo homer in the top of the second, giving the Red Sox the 1-0 lead. Incredible failure Matt LaPorta responded by leading off the bottom half with a homer of his own, I guess to prove his penis was just as great. First baseman Russ Canzler, or 'Canz' as Hyder calls him, singled right after that. And then Beau Mills hit a home run. I'm sure Duckworth remained composed, because he's not some horrible child like Dustin Richardson. Plus he got to work with Kevin Millwood, who was on the PawSox last year. I still can't get over it. 3-1 Columbus, in your face, Pawtucket.

But then Pawtucket was like, Hey, you talkin' mess? CF Che-Hsuan Lin led off with a walk, then nine-hole champion Tony Thomas singled. Lin to third, and a wild pitch brought him home. 3-2! Thomas made it all the way to third, which worked out well because Pedro Ciriaco singled. Is Ciriaco a good guy? I hope so, because I think I have feelings for him. TIE GAME!

But Columbus, those gritty, determined bastards, tied it up with a solo home run. LaPorta again. Duckworth, what happened? And maybe this output from LaPorta will reignite the little flame of love for LaPorta. Or is it too late? Or is it just a fluke? SMALL SAMPLE SIZE! SMALL SAMPLE SIZE! /forum douche

Everything got kind of quiet until the sixth inning, when Ciriaco led off with a double. And then Iglesias bunted! Yes! A single for Iglesias and Ciriaco on third! A wild pitch got Iglesias to second, and then Lavarnway flew into a sacrifice double play. I did not even know there was such a thing. When's the last time you saw anyone fly into a sacrifice double play? But it happened, Lavarnway flew out to center and Carrera threw the ball in to third to get Iglesias out. Ciriaco scored, and the game was tied again.

Ninth inning. 48-year-old German Nobel prize winner Frank Herrman was pitching for Columbus. He got Gomez out, so that was good for him. But Josh Kroeger and Daniel Nava hit back-to-back doubles to give the Red Sox the one-run lead. Hot hot hot Nate Spears settled for an IBB, but Lin hit a line drive to left! Nava scores! 6-4 Pawtucket and that's it, the rest of the game is of no consequence.

Garrett Mock closed the thing out, after a 1-2-3 eighth. Sometimes Garrett Mock surprises me, usually by swinging by my work to bring me lunch.

hot with the bat, not looks-wise:
1. For some reason I thought Tony Thomas got on base a lot, but I looked it up and he does not. I love the kid, but he strikes out like a motherfucker.
2. Matt LaPorta, IL player of the week! I'll drink to that!
3. "The wind was blowing out it didn't have anything to do with the early power display between the Clippers and Pawtucket Red Sox." - Huh? Does not compute. ERROR. ACCESS DENIED! ACCESS DENIED! (Massie)
4. "Nava scored ahead of a throw from LaPorta on a close play at the plate. Both catcher Matt Pagnozzi and Columbus manager Mike Sarbaugh argued the call with umpire Marcus Patillo, but to no avail." (ibid.)
5. Wasn't David Huff supposed to start this game? I can't trust anyone any more.
6. “I don’t care who I’m facing,” said LaPorta, who batted against four former big-league starting pitchers in the Pawtucket series. “It doesn’t matter. If you’ve got a ball in your zone, you’ve got to hit it.” (Massie again)

7. This is what I'm talking about. Over on SoxProspects.com, someone brought up Mauro Gomez being hot and maybe having a great season. And of course, OF COURSE you get that one guy who responds with undisguised scorn, like, NO, STUPITT! Some people would rather be RIGHT than civil. Or I guess would rather be visibly right, to the point where they nay-say any mildly radical idea. What does that add? What does that accomplish? Wow, cool, okay, you're smarter than me. You win. How dare someone advance the very idea of Gomez getting a call-up. Dude, have a cocktail or smoke a jay.

By the way, Gomez reminds me more of Jeff Bailey than Brian Daubach, but that works. : D

TONIGHT! Toledo! Hey, I went there! We had so much fun in Toledo. Doug Mathis will throw down v lefty Casey Crosby. Crosby looks tough and Mathis has not been very reliable, so we'll see.