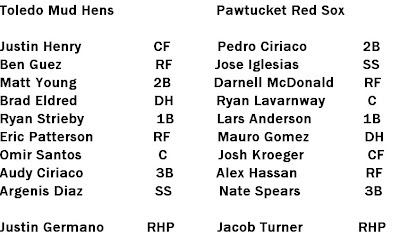 Germano started for the Red Sox and pitched seven two-run innings. He struck out four, walked nobody, and gave up a home run to third baseman Audy Ciriaco.

Young Jacob Turner started for Toledo and he is very young and just turned 21 like a week ago and he is #1 Detroit prospect guy. Turner got a couple of outs in the seventh inning, but after he issued a second walk, they took him out. Lefty Matt Hoffman rode his BMX out to the mound... And did not get Nate Spears out, instead walking him to load the bases. So Hoffman was replaced by Jose Ortega, who faced the delightful Pedro Ciriaco. Ciriaco hit a two run single, is what he did, so great game for Pedro.

Alex Wilson took over for Germano in the eighth, kept Toledo scoreless. Until. Ninth inning, Pawtucket up 4-2, Wilson shooting for a save. DH Brad Eldred reached on an error by Iglesias. Wilson got first baseman Ryan Strieby to strike out, but gave up back to back singles by RF Eric Patterson and catcher Omir Santos. Bases loaded! Wilson is extracted, replaced by Garrett Mock. Theoretically, that sounds nice. Mock got Ciriaco to ground into a force, which scored Eldred but got the second out. So, one out, how hard is that? The answer is Argenis Diaz, who hit a two-run single... 5-4 Mud Hens.

Josh Kroeger doubled in the bottom of the ninth but Hassan, Spears, and Ciriaco just left him there. Una verdadilla pesadilla para Kroeger, si?

ciriaco went 3-5:
1. Pedro Ciriaco went 3-5 with two RBI and a stolen base. I love this guy. I want to meet him. I just want to tell him that I think he is great. And also, keep him in a jar in my basement.

2. "Turner, pitching for just the third time in Triple-A this year, restrain the PawSox' offense to just four hits, but with three walks, and intelligent base running, Pawtucket managed to tag the ninth pick of the 2009 draft for four runs." - Kevin Pereira

4. Darnell McDonald played left, had an RBI to help the PawSox. They never care about helping out the team in the Boston papers. McDonald did warmup tosses with the bullpen catcher and sailed a couple over the catcher's head. Intentional?

5. Did you know that Josh Kroeger played in Venezuela in 2011 and was named team MVP for the Navigantes Magallanes? Everybody loved him. We'll discuss it later.

Tonight it's Matsuzaka v Casey Crosby. Maybe fireworks, I don't know, I'm not going.
Posted by Jenks at 11:19 AM