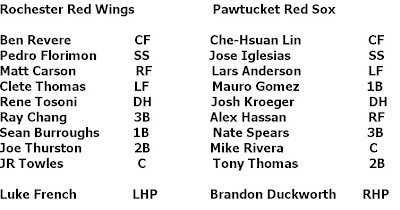 Rochester... No, Pawtucket wins, 7-6. Although Rochester probably wins at being a bigger city with a fancier ballpark. But I like McCoy Stadium and its homey simplicity. And the concrete and the little bats fluttering around at night and the way box seats are red or green and they cost the same even though the green seats are better.

The Mighty Brandon Duckworth started for Pawtucket. Duckworth is magnificent. No wonder all those IronPigs fans love him so much. He's not like this thrilling fireballer, but just a guy pitching in the minors. Just a guy. Duckworth did not have that great of a start - Five runs on seven hits, including a homer - but he got the win. He owes the offense some beers, really. (Note: Duckworth did not get the win, Will Inman did.)

Luke French started for the Red Wings. He used to be Lucas French, according to myself. French pitched six innings and left with the score tied 5-5. The Red Wings grabbed the lead in the top of the seventh, when shortstop Pedro Florimon hit an RBI single. Florimon! How is it that he had so much success against Pawtucket? Isn't he a freshie from double-A?

Pawtucket took back the night in the eighth inning, in spite of it being a day game with thousands of disgusting, screaming children. Esmerling Vasquez was pitching. Vasquez got a couple of outs, then Jose Iglesias singled. Oh, holy fuck, game over. Exit Vasquez, enter Tyler Robertson and his attitude problem. Lars Anderson reached on an error by second baseman Joe Thurston. Anderson to second, Iglesias on third. Okay, thanks Tyler Robertson. Anthony Slama takes over, facing the truly terrifying Mauro Gomez. Slama evidently has no intention of ever leaving Rochester. So, you know, Gomez hit a two-run double. Gomez effectively won this game for Pawtucket.

can we talk about something else now?
1. STEVE HYDER KNOWS WHAT'S UP! "Anyway, if you’re a baseball fan, you know the worth of Brandon Duckworth, the right handed pitcher in his second year with the PawSox. “Duck” is 4-0 a a starter and a bullpen guy for the first place Pawtucket club. Currently in the starting rotation, he has proven his worth time and time again in the last season and a quarter. Brandons’ last win was the 100th of his minor league career." (sic all)

4. Commenter PREDATOR has a conspiracy theory: "The DUCK was messed with by BOWA , it was his daughter that started the DUCK POND and from there it went down hill , to bad that personal items get in the way of some things , he was a miserable type of manager nothing was ever as good as his world series team and he let them know it"

5. "Duckworth appeared to be a cornerstone of the Phillies future during the 2001 season. However, the mild-mannered right-hander got around the league a couple times after the ’01 pennant chase, big-league hitters caught up with his repertoire. However, in Game 159 with the Phillies clinging to hope that they could catch the Braves, Bowa yanked veteran 13-game winner Omar Daal from a start in Atlanta in favor of Duckworth." - Finger Food. Wow, what is the deal with Duckworth and Larry Bowa?

6. "Brandon Duckworth at this time was a pitcher with the potential to be a significant contributing starting pitcher. He had a promising 2002, wild around the edges, as evidenced by the 1.44 WHIP, but he did have 167 K in 163 innings. Plus, and most importantly, fans could wear swim trunks and wear duckbill hats sitting in the stands when he pitched." - Dan from The Other World

8. " I could have called this Ducky Log but that would be tacky so I'll go the serviceable route. There was some minor displeasure when KC promoted Duckworth to take Hochevar's spot in the rotation but I stayed silent knowing that while he is not a world beater he is certainly steady. You know what you are going to get - 5,6 innings with 3,4 runs. Not great but it keeps his team in the game. Last season in three starts he had a 4.02 ERA and in 2006 had a 4.85 ERA in eight starts. So he is at least consistent and is definitely protecting some young arms from being rushed. It could always be worse. " - Jeff Parker, Royally Speaking, AUG 2008.

9. "Personally, I'm happy to see Duck back in the bigs. He's a good guy and someone you root for. Always a great interview and a real intellegent guy. He has the stuff, hopefully he can do more good than bad this time up." - Everything Royals, AUG 2008

10. Brandon Duckworth does not know if Mike Piazza is gay.

TONIGHT! Okay, in like 15 minutes. That bum Doug Mathis v Columbus Clippers' Chris Seddon. When I see guys like Chris Seddon cycle through IL teams, it makes me feel super old. I'm probably going to this game, but like halfway into it because I'm lazy and I just want to have a PBE.