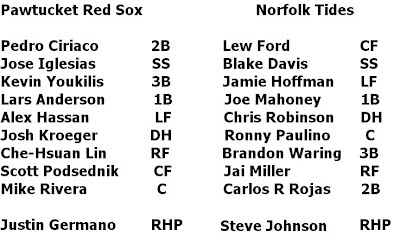 Justin Germano was the starting pitcher for Pawtucket and he had a bad day. Germano only lasted three innings, possibly because of the six runs he gave up. And it wasn't like, hey, my pitch count is way up and it's late in the game and I'm losing it. No, the horror started early. Blood and entrails all over the first inning.

With one out in the first, Germano walked shortstop Blake Davis. Walking Davis is the equivalent to that wonderful feeling you get right before you vomit into a dirty toilet bowl at three a.m. Then it was single! Double! Single! Double! After all that chunder, Germano managed to get two more outs and collapsed onto the bathroom floor, covered in sweat... 4-0 Norfolk.

Designated hitter Chris Robinson led off the third inning with a triple, thanks to the lock of hair he keeps in his pocket. Or the cross around his neck. Shortly thereafter, third baseman Brandon Waring hit his first home run of the year. 6-0 Tides. Oh, Justin Germano. I guess you can't be fly 24-7.

Pawtucket did manage to put a few runs up, starting in the fifth inning. Norfolk starter Steve Johnson was long gone and Willie Eyre was pitching. Holy fuck, Willy Eyre? How many former Twins are on this damn team? (Ans: Three.) (Or four.) There were a mess o' singles, Podsednik stole a base, Ciriaco drove a run in, et cetera. Eyre was replaced by Pat Neshek (SEE?) and when all was said and done, Pawtucket had themselves two runs.

Know who else had an RBI in that fifth inning? Scott Podsednik, center fielder. Podsednik had himself a day, because he drove in another run in the seventh. Oh, honey, you ain't gotta prove yourself to nobody.

The Red Sox put another run on the board in the eighth, thanks to a dazzling ground out by Lars Anderson! Good work, Anderson! Good plan to get Iglesias home! But if you were there and you thought, okay, maybe we have a game here, you probably had your dreams crushed when Tony Pena came in to replace Clayton Mortensen. Pena gave up a couple of runs, is what I'm trying to say. Yuck! I'm glad I didn't have to bowl with him.

Jon Link pitched the ninth for the Tides and Pawtucket was unable to kidney punch him. 8-4 Tides.

Lew Ford, you guys:
1. Che-Hsuan Lin played right field while Podsednik played center. I do not care for this development. Maybe it means nothing, maybe everything. Lin did chip in to turn a double play in the sixth inning, when Joe Mahoney lined out to right... Jamie Hoffman, the runner on first, evidently thought he was in good shape, but Lin hucked the ball in to Anderson to double him off. Wish I could have seen it.

2. Jose Iglesias, still hitting. It's weird to me that he has a son. He looks like a baby himself... But a baby with a lot of money that everybody loves and is ethereal cereal in the infield. How long will it last? Is this going to be forever?

3. Chorye Spoone and Mortensen each pitched a couple of scoreless innings for the PawSox. The Tides brought us a delightful medley of Johnson, Eyre, Neshek, Zach Phillips, and Link. And Chris Resop, Joe Savery, Garrett Mock, and Mike Koplove.

So, seriously: Why is Germano still chained down in Pawtucket? Bring him up and let's have a look... At his naked body!

Gross, sorry. TONIGHT! Brandon Duckworth up against Brad Bergeson's naked body. Miguel Tejada may be there, too, don't worry. He's got the part of the pizza guy.