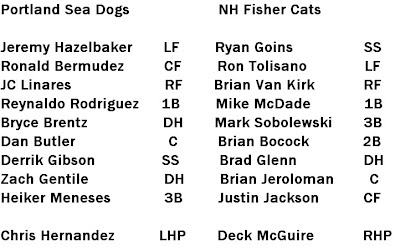 Wow, that was what the doctor ordered! 7-6 Sea Dogs. Double-A is wonderful. I nearly forgot. Everyone's so hungry! Vivacious! And also, I'm pregnant.

I have no horses in this race, so let's pretend I'm rooting for the home team. Starting pitcher for New Hamp was Deck McGuire. Classic baseball name, McGuire. DM gave up four runs on six hits, including a home run by Juan Carlos Linares, who has evidently ditched the 'JC' and gone back to his full name. Can't he just be Juan Linares? I don't get it. But I love him just the same.

Starter for Portland was lefty Chris Hernandez, who is certainly not what you'd call finessey. Hernandez was hard and wild for 5 2/3, giving up four runs on eight hits. Hernandez walked three, struck out four, gave up a home run to first baseman Mike McDade.

Portland put the first run on the manual scoreboard when Ronny B hit an RBI double in the first inning. But in the bottom half, right fielder Brian Van Kirk singled with two outs and McDade hit that home run. Mike McDade appears to be a bona fide slugger for NH. I love him already. 2-1 Fisher Cats after one inning.

But the Sea Dogs would. Not. Have it, Bert. Third inning, Linares homers off McGuire with two outs. McGuire then walked first baseman Reynaldo Rodriguez, who'd been hit by a pitch in the first. In the left elbow area. It looked painful and Rodriguez grimaced through most of the game. OWWEEE. But anyway, Bryce Brentz singled and Dan Butler walked to load the bases. And then SS Derrik Gibson came through with a line drive single to center, scoring Rodriguez and Brentz. 4-2 Portland!

So with the runners now put into place by a bunt, right fielder Brian Van Kirk hit a ground ball down the left field line, right into the visitors' bullpen. Which isn't a bullpen bullpen, it's one of those foul territory bullpens you frequently see in the minors. But the ball was lost among the sweaty relief crotches and crevices, so it was ruled a double. Two runs scored, tie game.

Oh! I forgot to tell you something kind of important. This was a double header, so the game was only supposed to be seven innings. But the game stayed tied, so it went into the eighth. Ronald Uviedo was pitching for the F-cats. Gibson hit a line drive double to left to kick start the delicious, delicious offense. Second base dude Zach Gentile hit a bunt single to keep it going. At that point, I had gotten up to hit the lav, so upon my return I noticed that Gibson had somehow scored. The mall rat who was at the game with me wasn't much help, saying that he'd seemingly come home for no reason. And since I am Smart Suzy Sunset, I deduced that a balk had occurred. I was right, of course, so that sucked for New Hampshire. Not the team, but the entire state.

And then third baseman Heiker Meneses bunted! Gentile to third! Uviedo walked Hazelbaker, got Bermudez out, but Linares was the next batter and Uviedo probably should have done things a little differently because Linares doubled. Sweet, sweet Linares, come back to Pawtucket. Everybody eats when they come to my house. Two more runs score!

Uviedo... Oh, my darling. Uviedo walked the next two batters. Coñazo! But catcher Dan Butler popped out. Butler is NOT invited back to Pawtucket, thanks very much.

Caleb Clay came in to close the game out. He gave up a two run homer to Brad Glenn, but it was not enough for the Fisher Cats and Portland took home the win. On the bus, with some cold beers in a gum bucket. Do they let you drink beer on a bus in double-A? I should ask Tom Signore, because he's freak nasty.

i love you, me neither:
1. Bus Leagues Baseball has a cool Q&A with Deck McGuire!

2. Derrik Gibson went 3-4, but that doesn't change the fact that I hate how he spells his name.

3. Brock Huntzinger also pitched for Portland and wound up getting the win.

4. Ron Oviedo can take heart, because the day before this game he took part in a combined no-hitter. Which I missed by one freaking day.

I did stay for most of the second game, where Billy Buckner pitched. There weren't many people left at the ballpark, so even though I had killer seats to begin with, I moved over to the third base side. I was sitting there cramming fries into my wordhole when I noticed Heiker Meneses making the 'throw ball' motion toward me. So I put the fries down and stood up so he could toss me the ball. Which I caught, thank godtopus. Although it was such a gentle underhand that perhaps even your mom could have caught it. Anyway, thank you Heiker!

TONIGHT! The return of the Pawtuckets, featuring Alex Hassan as 'Britta'. Oh, stop it, Hassan is perfectly adequate. They will face Toledo and I, for one, don't care who's pitching. So I'm going to the game.