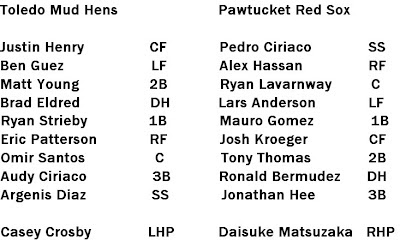 Daisuke Matsuzaka started this game for Pawtucket and maybe he's just going to be on the PawSox. I can live with that. I lived with Lenny DiNardo, Kris Johnson, Edgar Martinez, and Barry Hertzler so I can endure even the hardest storms. Matsuzaka pitched five decent innings got up to 56 pitches, then went grocery shopping. He allowed no runs, which certainly helped the team.

Starter for Toledo in his little pinstriped pants was Casey Crosby. Crosby pitched seven innings and was like, striking out all the Pawtucket kidz, very free and easy. Crosby started the eighth, but when Tony Thomas and Ronald Bermudez hit back-to-back singles, well, then it's time to get your coat and head home. Damn fine work, son.

The Red Sox scored first in this game, when the Venezuelan Nightmare hit a solo home run in the second inning. Pawtucket led 1-0 up until the seventh inning. Chorye Spoone got himself a piece of Hot! Scoreless! Action! when he allowed no runs in the sixth. But Tazawa got racked in the seventh and eighth. Eric Patterson hit an RBI single in the seventh, and then another run scored on a Tazawa balk. This action gave the Mud Hens the 2-1 lead.

Eighth inning. Tazawa still in, trying to work through some stuff. Center fielder Justin Henry bunt singled with one out. Ben Guez struck out looking, but Matt Young singled to put a couple on for big Brad Eldred. Eldred's an IL vet and he knows the game. So he homered, just like that. Fly ball to right center, POW! I'll bet it was majestical! 5-1 baby Tigers!

And now we return to the bottom of the eight, with Thomas and Bermudez on base. Here comes Luke Putkonen, which really just rolls right off the tongue. I am not familiar with Putkonen, but I wonder how Crosby felt about being lifted for this guy. Nate Spears pinch hit for third baseman Jonathan Hee. Line drive to center! Thomas scores! Next to hit was wonder boy Pedro Ciriaco, who also doubled... Bermudez and Spears score! 5-4! And keep in mind there are still no outs.

Alex Hassan stepped in and singled to get a bit of what he fancied. That's adorable, Alex, but move over and let the big dog eat. RYAN LAVARNWAY. Lavarnway homered, BLAMMO, fly ball to left. 7-5 PawSox!

See ya, Putkonen. Sorry about all of that. Darin Downs trotted out for left fielder Lars Anderson, who he walked. Downs struck out Gomez and got Josh Kroeger to ground out, but he was no match for the broad shoulders of Tony Thomas who doubled and scored Anderson. Bermudez made the last out. 8-5.

Mark Melancon pitched the ninth and maintained his sleek 0.53 ERA. Did you hear that he was kind of a weird guy?

2. Tony Thomas went 3-4 and stole a base. Mauro Gomez got zero hits and thrice struck out. You're still awesome, Gomez.

3. Putkonen had just come down from Detroit: "Putkonen with the Tigers this season was 0-2 with a 8.59 ERA and 2.59 WHIP in 7 and 1/3 innings pitched. To say that was bad would be an understatement." - from Fear the Shadow

4."Matsuzaka threw rapid fire over the first several innings, including a two-minute second inning on just five tosses. In that second frame, third baseman Jon Hee laid out for a great line catch on Hens DH Brad Eldred that saved a sure base hit or more." - Joshua Kummins

5. "Perhaps a change of scenery was all Kroeger needed to get the hang of the Pawtucket-Toledo matchup. After going 0-for-13 earlier this month during the team’s four-night stay in northwest Ohio, he is now a comparatively better (2-for-7) in this series with a pair of extra-base hits." - Al Daniel, Providence Sports Scribe

TONIGHT! Well, it wouldn't be a series unless Brandon Duckworth pitched. He'll face Toledo's Thad Weber. What? Something wrong with my font? IT'S FRENCH POLYNESIAN!