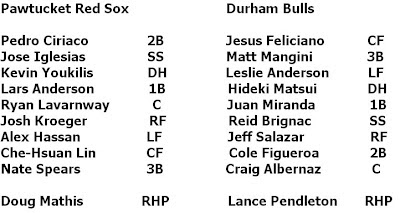 Red Sox win 5-4 in a seriously crazy game that probably no one enjoyed. Doug Mathis started and Durham got ten hits off him. LOL.

Hold on, I have to compose myself.

Okay, Mathis pitched 5 1/3 innings and gave up four runs on ten hits. When did the Durham Bulls get so damn wacky? Again, in '06 your first four batters were Darnell McDonald, Delmon Young, BJ Upton, and Elijah Dukes. BAM. And now I find myself wondering... Cole? Figueroa? WHO IS COLE FIGUEROA? And Doug Mathis is so stupid. He's lucky he wasn't pitching against Columbus or something. Ten hits, unbelievable. Classic Mathis.

Let's take a look at the Bulls' time with Doug M. In the first inning, two singles and a double by Hideki Matsui put them on the board 2-0. Reasonable enough. Oh, wait, that makes it sound like Hideki Matsui himself got all those hits. That is not the case. Unless that excites you, then we can go with it. Otherwise, Matt Mangini and Leslie Anderson were embroiled in the offensive skirmish.

Second inning, second baseman Cole Figueroa singled and stole second, but Mathis weaseled his way out of the inning somehow. But Mathis could not be normal for long, and he led off the third inning by hitting Mangini with a pitch. And then Mangini fainted while Adrian Gonzalez just stood there like a dope and watched. No, what really happened is that Leslie Anderson singled.

Something weird happened after that, with Hideki Matsui batting. The ump called catcher interference on Lavarnway and gave first base to Matsui. Okay, maybe not so weird, but I don't know exactly what happened and I have no further information and that pisses me off. Juan Miranda had that act to follow, and he had the bases loaded with no outs, but he struck out swinging. That means he is probably going to die soon.

Shortstop Reid Brignac at least had the sense to hit a sac fly, scoring Mangini, but the Bulls let opportunity slip through their hands like desiccant silica gel. I really would have liked to have seen Durham beat the crap out of Mathis, teach him a lesson for being weak. Instead, Mathis was the master and Durham the pupil. He is truly the worst.

Meanwhile, Lance Pendleton was pitching okay. But in the fifth inning, after Jose Iglesias singled with one out, Pendleton was replaced by Romulo Sanchez. Oh, this should be good. Sanchez faced Kevin Youkilis, who doubled to left. Iglesias to third. Then Lars Anderson was helpful around the house, hit a home run like doing after school chores. Like line drive to right home run. Then he folded towels in the clubhouse.

Sorry, I am all over the place. I'm not even sure any of this really happened. I'll just skip to the end and tell you that Mark Melancon closed the game out and got the save for Pawtucket.

Fortunately, the Durham Bulls are getting plenty of coverage. Let's talk to it!

come on girls:
1. Watching Durham Bulls Baseball found last night's game agonizing: "For those who might be counting (not really a mentally healthy activity under the circumstances) Bulls pitchers walked 7 batters after they had two outs last night. (11 overall, but who’s counting?)"

2. Jose Iglesias is getting hits. It's all very mysterious. Doesn't anyone want to dissect this phenomena? HELP ME.

3. Lars Anderson also walked three times (on the ceiling). That's what I call a good game.

5. "Durham pitchers gave up 11 walks, and the Bulls left 10 runners on base after banging out 11 hits in a 5-4 loss to the team with the best record in the International League. Pawtucket scored the game winner in the seventh when Che-Hsuan Lin singled off John Gaub (0-1) to score Josh Kroeger, who had walked." - Lee Montgomery, Durham paper

6. "Already, the Durham Bulls have sold out for Thursday’s game against the Pawtucket Red Sox, the triple-A affiliate for Boston. The 10,000 tickets sold are some 42 percent more than the 7,000 tickets sold for an average Thursday game in May, according to the Bulls’ front office." - Jason deBruyn, from some business newspaper.

7. "[Youkilis] and Matsui seemed to know what they were looking for, what they were trying to accomplish, which set them apart from their minor-league teammates, many of whom appeared to be playing passively, tentatively, taking good pitches and swinging at bad ones." - Adam Sobsey's meditation on a sad, bad game.

You know what's weird? That Doug Mathis can be this terrible of a pitcher and no one cares. No one's calling sports radio to say, "Where'd they find this Mathis bum?" No one's posting anything about him on forums. No one's live tweeting his pitching line with snide comments. Absolutely no one (except me, I suppose) cares, because it's irrelevant. In triple-A, no one can hear you suck. But it is baseball-bizarre that Mathis can be, basically, a body that they can throw on a mound for 4-5 innings while the world yawns.

TONIGHT! You're mine, completely. And Jim Paduch starts for Durham! Paduch's rise from the indie leagues is an unforgettable story. Enjoy.