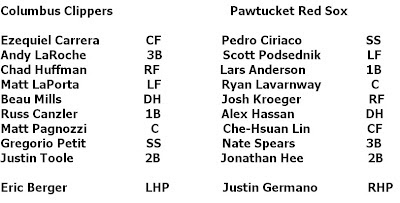 Well, no one scored until the third inning, and the story of the team that scored just won't stop unfolding. With one out, shortstop Pedro Ciriaco was hit by a pitch. Hey, be nice! New kid, old kid Scott Podsednik hit a line drive single to center, Ezequiel Carrera made an error of some sort that allowed Ciriaco to score and placed Podsednik firmly on second. 1-0 PawSox.

Up until the sixth inning, Germano had only given up two hits and was getting a bunch of ground ball outs. Just another day at the office. But shortstop Gregorio Petit led the sixth off with a single, and looks like someone left the cake out in the rain. Second baseman Justin Toole followed that with a single to left, putting runners at the corners. Germano got Carrera to ground out, but then third baseman Andy LaRoche reached on a fielder's choice, which means Toole was out at second or Petit was out at home. Right? NO. Pedro Ciriaco made an error, Petit scored, Toole safe at third, LaRoche reaches second base. BUMMER!

Oh, it gets worse. You think Ciriaco was the only one burning with shame at the end of the inning? Then you don't know about Nate Spears. Chad Huffman, right fielder and proud American patriot reached on a fielding error by Spears. Toole scores! Sad clowns in the infield.

But it gets worse! Overall disappointment Matt LaPorta, never an easy out, fly ball to left. Back back back. Gone. Three run homer. God, you hate to lose that way. NATE.

Pawtucket scored a second run in the bottom of the sixth when first baseman Lars Anderson hit his first home run of the year. In the bottom of the eighth, Scott Podsednik tripled to right field and then later scored on an Anderson grounder. 5-3 and Columbus reliever Chris Ray pitched a tight little ninth, trampling out the Red Sox and getting a save.

Junichi Tazawa pitched two scoreless innings after Germano's departure. I just wanted to point out what would ordinarily be a fuckin' A moment. It is, however, almost a non sequitor. No way you're as sad as I am.

2. Hitting coach Gerald Perry was ejected in the second inning, right after DH Alex Hassan struck out. What probably happened was that Perry ran out to the field and punched Hassan in the face.

TONIGHT! Pawtucket goes to North Carolina so they can get married and dress in ballgowns and have sex with each other. Wait, what? Durham Bulls! And no one parties like those guys! Brandon Duckworth, who never parties, will face Matt Torra, Keg Stand King. And his best friend is the King of Karaoke...