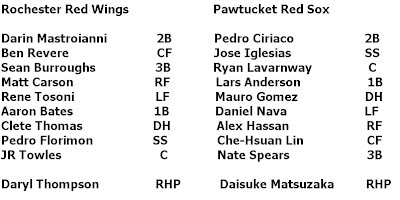 Daisuke Matsuzaka WINS! and is one out shy of pitching five innings for Pawtucket. Final score 4-0.

Oh, wait, there's more stuff. Daryl Thompson got the start for Rochester, which is the Twins AAA team. Thompson pitched for five innings and only gave up one run, a homer to left fielder Daniel Nava. Daniel Nava, still here. What will become of us when he finally leaves?

Post-Anderson walk, Manship had Mauro Gomez to reckon with. Gomez hit the ball to center, perhaps deeply, perhaps not. We don't yet have that information. It got Lavarnway over to third, though, so thank you, Mister Helper. Has anyone scored yet? No? Danny Nevada took care of that with an RBI single. ZAP, 2-0 PawSox. And then someone else hit a two-run double. Scientists are still using a major mass spectrometer to decipher the clues, but I happen to know it was Alex Hassan, Manship Assassin.

Alex Wilson was Matsuzaka's personal reliever, coming into the fifth to get one last out with a couple of runners on base. Wilson got third baseman Sean Burroughs to ground out and got the win for Pawtucket. Will Inman and Mark Melancon got all those other outs.

Note: Daisuke Matsuzaka did not sell the park out.

3. "To many Red Sox fans, Daisuke Matsuzaka has always been a man of mystery. Granted, the language barrier has made it next to impossible for the American populous to get a firm handle on the Japanese import, yet judging by the heavy media turnout for Matsuzaka’s rehab outing for the Pawtucket Red Sox Monday, the right-handed pitcher is still very much a big deal in his native land." - I just wanted to spotlight an error by Brendan McGair. It's 'populace'.

4. Although Matsuzaka's start was described as 'strong' and 'solid' by many media kidz, McGair states that he labored and nibbled and danced around batters. SO WHICH IS IT? I gotta believe the local guy here.

TONIGHT! Ross Ohlendorf v either Cole DeVries or Liam Hendriks, depending on who you trust. I'm going with PawSox Keith, who says Hendriks. I might go, although it's supposed to be rainy. But I might go.
Posted by Jenks at 5:52 AM