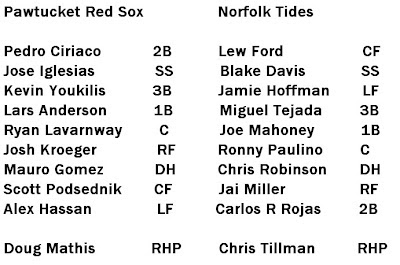 Starting pitcher for Pawtucket was Doug Mathis, who pitched seven innings and shut out the Norfolk Tides. He only threw 76 pitches. 48 were for strikes. Mathis got 13 ground ball outs. The one hit Mathis gave up was a triple to catcher Ronny Paulino, bottom of the fifth with two outs. Ride like the wind. Fight proud, my son.

Will Inman pitched the eighth and Garrett Mock pitched the ninth. So it is written, it shall be.

Christopher Tillman pitched 5 1/3 innings for Norfolk, but everything happened in the second inning. Mauro Gomez singled with one out. Yes, Gomez has returned, so the PawSox will start winning again. I am completely fucking serious when I say that. Tillman walked Scott Podsednik. Oh no, the fight's out! Alex Hassan and Pedro Ciriaco then hit back-to-back line drive singles to left. That scored a couple of runs. Jose Iglesias flew out to center, which scored Hassan. And finally, Kevin Youkilis finally contributed to his old school and hit an RBI double. Gee, thanks.

And then nothing else happened for the rest of the game. Wait, let me check... Ciriaco stole a base, Gomez hit another single, Norfolk's Chris Robinson tripled off Will Inman. Robinson saw Paulino's triple and was jealous. Again.

scott podsednik wants to go to boston wicked bad:
1. Miguel Socolovich was the subject of an Obscure Orioles Transaction. Is that him in the picture? HAW HAW HAW HAW!!!

2. Ryan Lavarnway came up twice with runners in scoring position and made the last out. I liked him better when he was fatter. FATTEN UP, SON!

4. I don't have much else to link to. Evidently, no one cared about this game. Probably because of all the shit going down in Boston. Can we please focus on the important stuff, like Doug Mathis' improbable start?

Remember how I went to Norfolk? Angel Chavez was on the team at the time. And Carlos Maldonado. And the ridiculously hot Fernando Cabrera. And Javier Lopez! Jeff Bailey! ROCKY CHERRY! Golly. Was that 2009? Crazy. Travis Denker! Oh oh oh the dude, the sidearm guy from Honduras or whatever. He was tall, slim... Whatever happened to him? Juan something? Jose. Jose something!!! GOD DAMN IT WHAT WAS HIS NAME?!

Maybe it wasn't Jose. Anyway, I had a really good time with the Tides.

THIS AFTERNOON! Last game in Virginny. Tony Pena Jr will take on Jason Berken. Tony Pena, this is your last clear chance. Remember what happened to Kris Johnson. TAKE HEED.