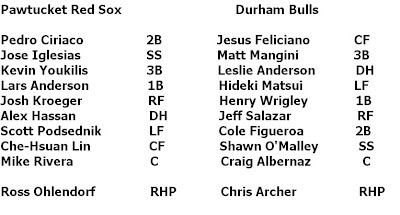 Durham Bulls take it, 6-5, even though I said Pawtucket was leaving yesterday. Big mistake! Maybe I'll get fired! And even though it hurts way down deep to tell you this, you have to know that Junichi Tazawa ruined everything.

Noted fashion photographer Ross Ohlendorf started for Pawtucket and pitched six innings. Has anyone pitched more than that aside from Daisuke? Has anyone pitched eight? THERE WILL NEVER BE ANOTHER NO-HITTER IN PAWTUCKET!! Ohlendorf gave up two runs on six hits. Sounds perfectly, dreadfully boring.

Durham Bulls starter Chris Archer left the game after getting a couple of outs in the fifth inning and probably thought he was going to lose. Archer kept the Red Sox scoreless until the fourth inning, which Josh Kroeger and Alex Hassan led off with BTB singles. Archer then walked Scott Podsednik to load the bases. Che-Hsuan Lin, who's a quiet hitter that I never talk about, grounded into a force, scoring Kroeger. Podsednik out at second. And then! Catcher Mike Rivera got his first hit of the season (maybe), lining a single into center field. Jesus Feliciano was all, WTF, this guy? Hassan scored, tying the game at two.

Know what else happened in that inning? Jose Iglesias singled, because I guess he decided he's going to hit balls now. Lin scored on a wild pitch by Archer, putting Pawtucket ahead 3-2. But Kevin Youkilis struck out looking to end the inning.

HOLY SHIT. I just realized that Pedro Ciriaco struck out four times... In six at-bats! What the hell happened in this game? Pawtucket left 16 runners on base. And check this out! Look who made the last out with runners in scoring position: Kroeger, Lars Anderson, Youkilis twice (Thanks, asshole), Rivera twice, Hassan twice, Jonathan Hee, and Lin. So, yeah, this game was well over three hours long.

Okay, we can talk about Tazawa now. JT gave up a couple of singles in the seventh, but no one scored. Eighth inning, first baseman Henry Wrigley got to first on a throwing error by Iglesias. Right fielder Jeff Salazar followed that up with a double. And then Iglesias made another error w/r/t Cole Figueroa's at-bat, landing Figueroa at first and getting Wrigley across the plate. Tazawa struck out Shawn O'Malley for the second out, but he walked pinch hitter Juan Miranda.

But it gets worse! Feliciano, wacky IL center fielder, tripled! Line drive to right and three runs score. So that's four unearned runs in the eighth inning that caused Pawtucket to lose, Tazawa to get the loss, and perhaps a parking lot waltz right outside the PawSox bus. Bummer.

attention, shoppers. outside we have... pawsox fight:
1. Iglesias got four hits, which is like the least he could do, but I still hope he feels bad for ruining everyone's night and eating all their steak.

2. "Playing in the field for the first time with the Bulls, Matsui threw out Pawtucket’s Alex Hassan when the Red Sox outfielder was trying to score on a line drive to shallow left field in the second inning." - Harold Gutmann
3. "Bulls manager Charlie Montoyo: “Great job by the team! That was as close to a walk-off as you can have. They made a couple of errors, Feliciano had the big blow and Miranda scored from first. That was as exciting as when Michel Hernandez scored three years ago. We didn’t pitch that good today, but somehow we stayed in the game. When it was 4-2 it felt like 10-2. But the guy we hit off has got good stuff.” - Mike Potter, INDY week
4. This Matsuzaka/Paduch/Matsui banquet is the puzzle piece that completes my post from yesterday. Sorry so late, longer letter later.

5. Iglesias was jinxed by Watching Durham Bulls Baseball! Gol' ding it! Also: "..Chris Archer was a mess. In addition to the 7 hits and 4 walks, he was charged with three wild pitches (one of them letting a run score) and he hit a batter. Yes, he got 9 Ks, but he was simply lucky that the seven guys left on base weren’t able to get in. And it took him 106 pitches to get through just 4⅔ innings.."

6. By the way, Romulo Sanchez got the win.

7. Please enjoy this breakdown and analysis of Matsui's plate appearances. Actually, I take it back and won't be providing a link, thanks to a terrible intrusive pop-up. Rest assured, though, it was cool.

8. SoxProspects.com feature comment: "Good to see Chris Archer isn't setting the world on fire. The last thing the rays need is more pitching and he was part of that Garza deal that robbed the cubs " - posted by 'remember04'

TONIGHT! Norfolk Tides! Justin Germano, Steve Johnson. Steve Johnson? That name is going to a bitch to look up.