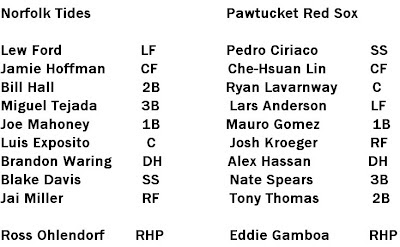 Pawtucket got the most runs, and the final score was 11-8, but did anyone truly win last night? Terrible game, horseshit pitching. Good thing it wasn't a heavily attended game, or the team would have scared fans away.

First of all, I though Pat Neshek was pitching for Norfolk? Instead, we got Eddie Gamboa. EDDIE! Eddie pitched 3 2/3 innings and gave up nine runs on ten hits. Everybody shoved him. I very nearly loved him.

Ross Ohlendorf started for Pawtucket, pitched four dumb innings. Ohlendorf also gave up ten hits, but the Tides only pushed across five runs. Junichi Tazawa stepped in after that and pitched a couple of innings. Tazawa gave up one run and got the win.

I don't even know where to begin except maybe the first inning, where it was evident that Gamboa was not in any shape to start a ballgame. Pedro Ciriaco singled to lead things off, then Gamboa walked four batters in a row. What a guy. 4-1 PawSox, because Miguel Tejada hit an RBI single at the top.

Eddie gave up four singles in a row at the top of the second inning, netting the Pawtuckets a couple more runs. Good work, Lars Anderson, who drove in both runs.

And then Ohlendorf had problems of his own at the top of the fourth. Right fielder Jai Miller hit a solo home run to get things rolling. A single and a walk later, Bill Hall hit a three run homer. Yes, that Bill Hall. Ohlendorf picked the rest of the outs, but Norfolk was hot after the Red Sox asses, down just a run with a 6-5 score.

HOWEVER. Bottom of the fourth, Anderson hit a two-run homer (total ICBM into right center, BANG! scoreboard brokedick) and Josh Kroeger hit a solo home run. Kroeger has more home runs than Anderson and more than Lavarnway, if you care about home runs. And finally, that was the end of Eddie Gamboa's night. Eddie tried in vain, but he never brought the Tides nothing but shame. Oscar Villareal took over and got the final out.

Remarkably, no one scored in the fifth inning. The Tides snared a sixth run in the top of the sixth, when catcher Luis Exposito hit an RBI double. Bottom of the seventh, Lavarnway hit a line drive single to right and he is really not that fast of a runner. But Tony Thomas is, and he scored from second. 10-6 Red Sox.

The only clean inning was the bottom of the seventh. Mark Melancon set 'em down 1-2-3. His good work did not carry over into the eighth, though, and the Tides scored a run. But Mauro Gomez hit a solo home run in the bottom half of the inning to really drive the point home: PAWTUCKET IS GOING TO WIN. But the Tides were all, WE ARE NOT DEAD YET, and put a couple of runners on with Chorye Spoone pitching. Spoone was visibly pissed about all of this. In fact, I saw many angry players last night. Will Inman, bless his heart, jumped into the ring. He immediately gave up a single to Lew Ford. Did you know that Lew Ford hit five singles last night? But the inning ended when Bill Hall grounded into a double play. Inman gets the save.

I like watching Mark Melancon pitch. The extension is impressive! So that was one good thing.

nate spears is fresher than a motherfuckin' peppermint:
1. Lars Anderson, five RBI. Which is why Hyder buttonholed him after the game, right? Anderson said he's got some kinda competition with Ciriaco for most televisable feilding. Lavarnway went 3-4, so he's not sweating it either.

3. "Lars Anderson followed by crushing – which is the applicable verb – a belt-high fastball that crashed off McCoy Stadium’s video board and smashed a pane. Besides extending Pawtucket’s lead to 8-5 the homer entered Anderson’s name in Pawtucket’s record book: it was the first ball ever hit off the seven-year-old video board." - Mike Scandura, who is the greatest. Why can't someone interview him? I wish I could.

8. "Misjudgments on lazy fly balls yielding to base hits, two strikeouts on wild pitches, four straight walks in an inning, and the destruction of the video board in right-center field define a wacky, 11-8 victory for the Pawtucket Red Sox over the Norfolk Tides at McCoy Stadium." - Baller intro, Pereira.

9. Hm, nothing from McGair. He could have put something awesome together. I'm v. disappointed.

TONIGHT! Justin Germano v Brad Bergeson. Can someone tell me the deal with Germano's hair? Have fun if you go. I must start preparing for my Lehigh Valley adventure.
Posted by Jenks at 10:59 AM