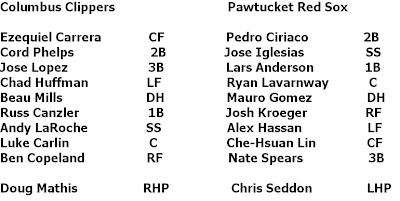 Starter for Columbus was Chris Seddon, who left the IL for a while. Seddon came to McCoy Stadium in 2006 with the Durham Bulls. I was there. Darnell McDonald batted leadoff for Durham, followed by BJ Upton, Delmon Young, and Elijah Dukes. Pitching for Pawtucket that day was Jimmy Serrano. This blog is an incredible resource. Seddon, in the year of our lord 2012, made it through six innings, giving up five runs on seven hits.

Pawtucket's action started in the first inning. Leadoff hitter and second baseman and fan favorite Pedro Ciriaco made it to second on an error, then was later brought home when Lars Anderson grounded out. Third inning, Iglesias singles with one out. All these Iglesias hits are weird, right? Iglesias stole second and then made it to third on an error. Catcher Ryan Lavarnway singled, scoring Iglesias. 2-0 Pawtucket.

In the fifth inning, third baseman Nate Spears hit a line drive double to right to get things started. Pedro Ciriaco then bunted toward third, made it to first and then continued on to second when Clippers third baseman Jose Lopez made a throwing error. Nate Spears scores, 3-0. Seddon got Iglesias and Anderson out, but he walked Lavarnway. Mauro Gomez came to the plate with this golden opportunity and made good, hitting a two-run double.

Columbus did not score their lone run until the ninth inning, with the useless Tony Pena pitching. Cord Phelps hit a solo home run. So bully for Cord Phelps. Someday Cord and I will get together for tea and sympathy and laugh about all of this, this one day in Rhode island when he hit a home run off Tony Pena in the ninth inning.

That's it. I'm super annoyed with all the bugs I've been wrangling with here. Stupid free service! This afternoon or tonight or whatever it's Junichi Tazawa v Zach McAllister. Bye.
Posted by Jenks at 10:43 AM