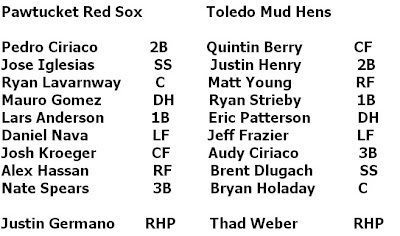 Pawtucket WINS! 5-2. The win goes to Justin Germano and Toledo's Thad Weber straps the L to his back.

Germano worked for five innings. It was terribly dull, so let's skip ahead.

Weber - Six innings for him, but let's focus on the second inning, when the Pawtucket Red Sox scored four runs. First baseman Lars Anderson led the inning off with a single, bless his little heart. And then Daniel Nava, who has been hitting a little bit lately, doubled to left.

With runners at the corners, Josh Kroeger hit a deep fly ball to center, deep enough to allow Anderson to tag and score. And it's Toledo you need to show how deep is your sac. (Sorry, that was terrible.) 1-0 PawSox!

Right after Josh Kroeger we get Alex Hassan, who I do not really get as a player, but I'm not the Master Interpreter of the Golden Era of Popular Music so what do I know? Hassan took a walk. Walking Alex Hassan is never a good sign. I would walk him, though. I would walk him on a leash like a little trembling chihuahua!

Okay then, Nate Spears, who loves to torture me... Spears singled to load the bases because he's been like bang boom pow these days. And I be like whoa. Pedro Ciriaco, the leadoff batter of your dreams, stepped into the ring, but he flew out. No one scored. Ciriaco also did a thing on suicides of the American Indian and nobody cared. Nobody showed.

And then you might think, okay, here comes Jose Iglesias and ese tigre no v'acer NADA. Ordinarily, yeah, but Iglesias did something freaky and doubled! I told you, it's never a good sign when you walk Alex Hassan! Next thing you know, Iglesias steps up with RISP and gets an XBH and all of a sudden, Lars Anderson starts getting all aggro and taking less walks and then! AND THEN! Garrett Mock! GARRETT MOCK! Garrett Mock is your closer and he's even doing a decent job at it! And Ryan Lavarnway's been a lifeless carp with his bat, for realsies.

Okay, bottom of the third, catcher Bryan Holaday takes a one-out walk. CF Quintin Berry hit a line drive single to left. Captain Wonderful Justin Henry hit the ball hard, but like right at Josh Kroeger in center. So Matt Young came through and delivered and fucking TRIPLED, and it sounds delicious, not that I'm rooting for the Mud hens. Two runs score! 4-2 Pawtucket.

Here's something else about Iglesias: He tripled off reliever Rob Waite in the top of the eighth. Lavarnway hit a sac fly to bring Iggy home. And that's co-operation! Garrett Mock closed the game out and the team went home to Rhode Island not feeling like a pieces of shit. Nice job avoiding the sweep. I'll bet they carried Iglesias around on their shoulders and got him drunk.

you spelled holiday wrong:
1. "Pawtucket starter Justin Germano blew through the Mud Hens in the first, getting three outs on just eight pitches, six of which were strikes. Germano didn't throw hard, with every pitch but one between 86-88 mph (three at 86, two at 87, two at 88) and a change-up at 81 mph." - Toledo Blade game blog, which I urge you to read. It's filled with good, good nuggets, or 'nugs'.

2. "(Andrew) Miller continues to be the pitcher struggles with his command: in his 11 innings with Pawtucket this season he has allowed just four hits while striking out 23, but he also has walked 14 (11.45 walks per nine innings, for those keeping track of such things)." - ibid.

3. "Hens RHP Thad Weber struggled in the early innings, allowing a leadoff triple in the first and four runs on four hits and a walk in the second. But after that Weber was lights out, retiring the last 13 batters he faced in a row. He got nine of those outs on ground balls, which is a good sign for him. Weber’s final line showed five hits and one walk in six innings with two strikeouts. Even with the four runs in this contest, his ERA is a strong 2.25 mark." - Hens Eggs

4. SoxProspects.com forum comment of the night: "Alex Hassan got off to a rough start this year, but now is OPSing .820 for the PawSox after a 2-4 performance today with a walk and two doubles.

His plate patience is really paying off, as his OBP is above .400 now. He could be an awesome bench player for us soon. " - avrpatsfan. This is probably Hassan's mom.

5. The Beyond Fenway blog is a great resource and you should read it. I have said it before: It's right up my alley, since if I have a free night and Pawtucket's not playing, I like to visit other nearby ballparks and Craig Forde will tell you who's pitching! It's like seeing what movies are playing! Except I don't go to movies, I go to baseball games.

TONIGHT! The Yankees, and they are playing in Batavia. And then Sunday everyone goes to Rochester and Andy Pettitte is going to pitch and I hate that I have to miss this. But tonight it's Brandon Duckworth v Nelson Figueroa, who is on my calendar right now... He's Mr. May for the Astros' puppy calendar!