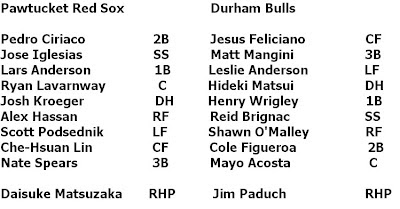 5-0 Durham Bulls, thanks to Daisuke Matsuzaka. DM worked into the seventh inning, gave up a triple to second baseman Cole Figueroa but got the next two outs before ceding to Tony Pena Jr. The loss belongs to Matsuzaka, who appears to have had a decent start.

Starting pitcher for the Bulls was Hideki Matsui. No, it was Jim Paduch, the dude from the Lincoln Saltdogs. Paduch got the win for Durham, since he gave up zero hits. He pitched six innings, giving up four hits and two walks. Paduch also had three strikeouts. Live those dreams, scheme those schemes, hit me with those laser beams.

Durham scored their first run (I always want to say 'its' first home run, as if Durham were some screaming multi-faced blob on the ball field) in the first inning, when Jesus Feliciano led things off with a solo home run off Matsuzaka. Matsuzaka kept his pants on, though, and allowed no further runs until the sixth inning, when first baseman Henry Wrigley hit a three-run homer.

And, yeah, Pena pitched the remainder of the game. But no one cares about that, right? Must have been a great night to be a Bulls fan.

opening a sliding door in Japan seriously takes five minutes:
1. I may have mentioned before how much I love IL President Randy Mobley: "The stars that have aligned here tonight to make this happen are pretty incredible,” IL President Randy Mobley said. “The league's 128 years old and you don't see many things that happen for the first time, but to have the game televised live in Japan is something that's never happened before. You have to say it may never happen again.” - Damn right! (link)

2. Ryan Lavarnway did hit a double, but everyone else? Off with their heads. Also, take away their smart phones. I swear they would die without them.

5. "Matsuzaka who plays baseball at ease while that West Coast was spacious wants to see it" - Not sure what this is, but it's about Matsuzaka and I had fun reading it.
6. Poor Jim Paduch. His start was good but he's just an afterthought. Luckily, Mike Potter took care of him: "It felt like Opening Day I guess,” Paduch said. “There were a lot of things going on, but you can’t let it distract you. You’ve got to break it down to its basic roots, just throwing to a catcher. I tried to mix up my pitches – this team’s a good-hitting team – and let them put the ball in play.”

7. "Pawtucket has had more success against the Bulls than any other team during Durham’s 15 International League seasons, leading the all-time series between the clubs 69-49 including 36-24 in Durham." - ibid. By the way, Mike Potter spelled everyone's name correctly and his article includes a slideshow, so you really should check it out.

8. PawSox Blog has some links for you. Also, check back here tomorrow for first-hand game information.

TONIGHT! Ross Ohlendorf v Chris Archer. Then goodbye, NC. Damn, I almost went back to bed and didn't bang this out, but I powered through! And I guess I'm up before everyone else, otherwise I'd have more links.