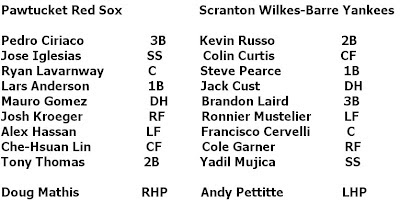 PawSox win, 7-5. I wanted more, I wanted higher, higher HIYA! Not because I hate Andy Pettitte or the Yankees, but because I love the Pawtucket Red Sox so much. From Lars Anderson to Alex Wilson, nothing but pure love and admiration!

Starting pitcher and game winner for the Red Sox was Doug Mathis. I was concerned that Mathis would be his usual... It's just that Mathis... He's had some control problems... He's weak and the other pitchers would eat him first on a desert island. But Mathis hung in there, got some outs, worked for five innings and gave up three runs and made way for the bullpen.

The Yankees rolled out Andy Pettitte. I know you know all about it, so I'll leave it at that. Pedro Ciriaco was the first lucky Pawtucket to face AP, and he doubled on a full count. I love you, Pedro Ciriaco. Jose Iglesias followed with a cheezy single right at Pettitte. Next guy, Ryan Lavarnway, hit a ground ball double to left, scoring Ciriaco. Lars Anderson hit a single, too, line drive to right. Iglesias scores! 2-0. And the score could have swollen up real good but Anderson got picked off. I can't be too man, Anderson learned a valuable lesson. Reality hits you hard, bro.

Top o' the second: Pawtucket did a number on Pettitte. Long story short he walked in a run, Lavarnway ended the inning by grounding into a double play. In the fourth inning, Tony Thomas hit an RBI double and Ciriaco flied out deep to score Thomas. 5-0 Red Sox.

The bottom of the fourth is when we started seeing the Doug Mathis we all know and love. Two walks and an error, no outs. Third baseman Brandon Laird grounded into a double play, getting a run over. Left fielder Ronnier Mustelier reached first base on a Josh Kroeger error, scoring another unearned run. 5-2. And the Yankees picked up another run in the fifth by way of an RBI single by CF Colin Curtis. 5-3.

In the eighth inning, Josh Kroeger was a man and did the right thing and hit a solo home run. That's what you are supposed to do to compensate for an error. Otherwise you end up like Alex Hassan, hated in five states. (I don't mean that.)

Bottom of the eighth, Junichi Tazawa pitching and he's only human after all. Tazawa loaded the bases with one out. Mustelier hit a two-run single. This is where I would start getting nervous, but Tazawa took a deep breath and struck out catcher Francisco Cervelli and race car driver Cole Garner.

Did we get all the runs, all the stuff? Did we turn off all the lights? Did I leave the iron on? HOLD UP. There's one run left! Lars Anderson, you beautiful tropical fish. Anderson hit an RBI double in the ninth. Garrett Mock got the last three outs, uno-dos-tres, GOOD NIGHT ROCHESTER WE LOVE YOU!

Jon Saphire was the home plate umpire and I'm pretty sure everybody hates him. He had to call balls and strikes on Pettitte. I wonder if someone from the Yankees tried to talk to him before the game? OH THAT REMINDS ME! I was listening to some of this game on the radio and Hyder said that PawSox skipper Arnie Beyeler DID IN FACT talk to the umps before the game and told them to 'watch for the balk'. So there you have it.

someday we'll get it together and we'll get it undone:
1. "The crowd, sensing his departure, gave him a huge ovation and the veteran responded by tipping his cap and then waving with his gloved hand. But it wasn’t over. The crowd began chanting “Andy Pettitte! Andy Pettitte!” and the pitcher stepped out of the dugout to tip his cap again — the first curtain call in Frontier’s 16-year history." - Jim Mandelaro, Rochester newspaper.

2. "Pitching in front of a regular-season record crowd at Frontier Field, Pettitte only wished he had done more to help the Scranton/Wilkes-Barre Yankees." - Oh, really? Pettitte really wanted to help the team win? Yes, and The Donnas write their own songs.

4. Check out the game highlights from Beyond Fenway.

5. Justin Thomas pitched a nice, clean, sixth inning for Pawtucket. Ryan Lavarnway's been kind of a bummer this season but he went 2-5. Mauro Gomez DID NOT GET A HIT.

6. SoxProspects.com featured forum comment: "On another PawSox note, with Iglesias' infield single off Pettitte he is hitting .563(9-16) in his last 5 games including today. The previous 4 games were 2-hit games. Positive signs." - (charliezink16)

7. "First-year PawSox outfielder Josh Kroeger bookended the 10-game road trip with a pair of homers, belting his second of the season in Sunday’s 7-5 triumph over the Empire State Yankees. He has yet to leave the yard at McCoy." - Al Daniel, Providence Sports Scribe.