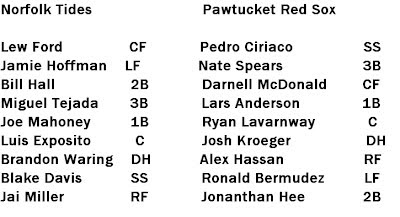 6-4 Norfolk. Sorry, PawSox. You never had a chance.

Starting pitcher for Pawtucket was Doug Mathis, whose last start was good. I knew it couldn't last. Mathis gave up six runs on ten hits through 5 1/3 innings. And three home runs, he gave up. Three. What is he, Thad Weber? (Sorry, Thad, I love you dearly.) And still no one cares about how much he sucks. Except me.

Starter for Norfolk was Zach Clark, who... I don't know, I have never heard of him. All I can tell you is that he just came up from double-A and perhaps wrote a few paperback thrillers. But he gets the win!

Pawtucket snapped back in the bottom half of the third, when Nate Spears hit a two-run homer. 2-1 Red Sox! Top of the fourth , though, Bill Hall led off with a single. And Miguel Tejada doubled, scoring Hall! It's 2006 all over again! Where's Joe Borchard?

Left fielder Jamie Hoffman hit a solo home run in the fifth to bump the Tides up 4-2. HOFFMANIA! Mathis even came out for the sixth inning, but after getting the first batter out, Norfolk doubled and homered. Doug Mathis, you fucking suck. How does this guy have three wins? What is this guy's deal? Is he sore? Injured? Is he an alcoholic? Is he on dope? Is that what it is? He parties too hard? Is he a whoremonger? Maybe he shoots smack. Oh, no, wait, maybe it's oxy's. Who knows?

Garrett Mock, welcome to the hill. Mock, who's actually pretty reasonably good-looking and has surprised me with his effectiveness this season, got the last couple of outs and then went on to pitch a scoreless seventh. Josh Kroeger doubled in the seventh and scored on a sac fly by Bermudez... And then, holy smokes, is JC Romero also on the Tides? WHAT IN THE HELL? Romero pitched the ninth for Norfolk. Kroeger homered off him, so ha ha. And then! After Bermudez doubled, Arnie Beyeler PINCH HIT FOR JONATHAN HEE!!! A pinch hit, in Pawtucket! A lunge toward a win!But the pinch hitter, one Mauro Gomez, grounded out to first.

Doug Mathis is a cold, hard reminder of the fakery in triple-A.

they'll say they never saw that bastard again:
1. Josh Kroeger is from Davenport, Iowa. Kroeger had a good day at the plate and didn't care that the team lost because his numbers improved. He hates Pawtucket.

2. "Spears extended his hitting streak to seven games, his run-scoring streak to six and his RBI streak to three. He has now driven in a total of five runs in as many games this homestand." - Providence Sorts Scribe

3. Darnell McDonald was hit by a pitch. He still hasn't hit anything with Pawtucket. This could be a bad sign or it could mean nothing.

4. "Jose Iglesias was absent from the PawSox' lineup for the third straight day, and will sit tomorrow as well. Arnie Beyeler stuck with last night's explanation, "He's banged up." When asked for a specific area, Beyeler declined to elaborate." - Kevin Pereira, superstar PawSox writer.

5. Brendan McGair did the right thing and talked to Ron Johnson.

TONIGHT! Miguel Gonzalez up for Norfolk, Ohlendorf for Pawtucket. Or will we see the return of the highly effective Oh;endorf? And I will be in attendance!