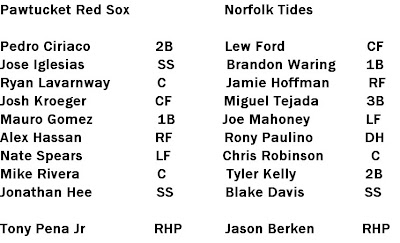 Pawtucket's starter was Tony Pena who threw the ball for a little bit and did not get shelled. Sleep easy, Tony P.

I don't know, what the fuck do you want me to say? Some dumb sweaty jocks played a game on a field, put some costumes on and took everything very seriously. You think I give two craps about Alex Hassan? Alex Hassan is the worst! And Chorye Spoone, geeez. This team is so boring.

i cried a tear. lew wiped it dry:
1. Lew Ford struck out twice.

2. Okay, I do like one person on the Pawsox. Pedro Ciriaco. I like that guy. I wish I could have bowled with Ciriaco, but I don't even think he was there.

3. From radio human Aaron Goldsmith's family-friendly and inoffensive blog: "The season did not begin well for Melancon in Boston. He gave up 11 runs in two innings pitched before being sent to Pawtucket. However, since joining the PawSox, Melancon has refined his pitching and is flat out dominating batters throughout the International League." Wow, really? Let me punch that up for you!

"Melancon sucked when he was in Boston. He only pitched for like two innings but somehow managed to give up eleven runs. Eleven! You kind of even wish he was injured, just to excuse that kind of slop. So they kicked him downstairs, where he found it easier to get outs when facing guys like Seth Bynum and Adam Loewen."