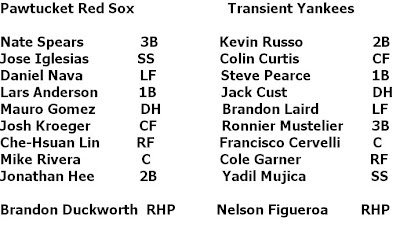 PawSox win, 9-3. Brandon Duckworth gets the win. Scranton Wilkes-Barre starter Nelson Figueroa takes the loss because he gave up eight runs before he could finish four innings.

Duckworth pitched 5 2/3 innings and only gave up one run on five hits. He struck out seven, so all-in-all a good day's work.

Figueroa, whoa. I like Figueroa since he's one of those IL guys I see pretty regularly, but what the heck happened? The Red Sox got to him a little in the first inning, when Daniel Nava hit an RBI double to give Pawtucket the 1-0 lead. But it was the next inning, the second, when the walls came tumbling down. Josh Kroeger led off with a single, and then Che-Hsuan Lin of all people hit a home run to left. 3-0 Pawtucket!

Figueroa nailed down a couple of outs after Lin's home run, but then he walked Nate Spears. Jose Iglesias and Nava then hit back-to-back singles, scoring Spears. 4-0 Pawtucket! First baseman Lars Anderson then hit a ball deep to right for a two-run double off the wall... YES. 6-0!

The Red Sox scored their seventh run in the third inning on a passed ball. And then in the fourth inning, Anderson doubled with two outs. Exit Figueroa. Enter Michael O'Connor, A Lefty, to face Mauro Gomez. Who is a righty. And a slugger. And is currently batting .324 against lefties. What the hell did you think was gonna happen? Gomez doubled, scoring Anderson, and the Yankees had to have known at that point that it was over.

In fact, the Yankees didn't score until the sixth inning, when reliever Chorye Spoone ran into a little trouble and walked in a run. WEAK.

Mauro Gomez, who is Brian Daubach or Roberto Petagine or Jeff Bailey or whatever, led off the seventh inning with a home run. Wonderful! The Yankees put up a second run in the bottom of the seventh on a sac fly, and then a final run in the eighth when catcher and non-Italian Francisco Cervelli hit an RBI double off Will Inman. The ninth inning passed with little incident, except for Jack Cust's ejection for... Well, he was tossed in the top of the ninth and he didn't even bat in the eighth or the ninth, but he was called out looking in the seventh and Kevin Russo was called out looking for the last out in the eighth inning so I'm guessing it was along those lines.

It's funny, when was the last time a PawSox player was ejected? I can't even remember. Dude, it's triple-A.

2. Daniel Nava continues to be happy with the bat, going 3-5 in this game. Catcher Mike Rivera did not get a hit. I am pretty sure he hasn't gotten a hit since he came to Pawtucket. VETERAN PRESENCE.

4. "Jake" Nava? JAKE? His name is Daniel, Rochester paper! How do you screw that up? Oh, that's right, overall slipping of standards for sportswriters. And sustained excellence by ME.

5. "Figueroa, who's nine seasons were spent with seven different teams, surrendered seven earned runs over 3 2/3 innings, which made the Red Sox fans at the game happy." - Howard Owens. No one cares anymore, no one.

6. Not true! Marc Normandin cares, and he's got the Ciriaco/Gomez charts and graphs to prove it. (Over the Monster) By the way, a commenter notes: "I remember when he (Tazawa) debuted for the Red Sox a couple years back and he was so young, yet he seemed unflappable and poised." Absolutely. I love watching Tazawa pitch.

7. "Mauro Gomez took advantage of Will Middlebrooks’ promotion to Boston as he passed him for the team-lead in home runs by hitting his tenth of the season. He is second in the International League to Toledo’s Brad Eldred (13)." - Beyond Fenway

8. Third baseman Ronnier Mustelier was just promoted from double-A, even though he's 27. Curious? Read this.

This afternoon! OH GOD NO. Pawtucket's starter is Doug Mathis, which sucks because Mathis has been rubbish and I wanted Pettitte to be the object of a blowout. But now the Yankees could potentially score more runs. Yuck. Anyway, come find me tonight and I will buy you a beer. You know where I'll be...
Posted by Jenks at 7:04 AM