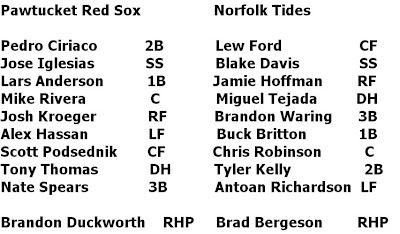 Norfolk Tides win 6-3. Starter Brad Bergeson got the win. Minor league website is minor league: I can't get the box score up. And I am nothing without a box score. The box score is all I am and all I am is box score. There are no shadows on the cave wall. There is no lady, no tiger, no bees, November.

But this is good. This is like driving in the Boston area: It's dangerous and uncertain but in the end, aren't you a better driver for it?

Brandon Duckworth pitched for Pawtucket, reliable as a wristwatch. Duckworth gave up nine hits, though, which led to four runs.

Okay, this is hard. The Tides were the first team to score. Third inning, shortstop Blake Davis hit an RBI single. Oh, please. Pawtucket pulled ahead in the fifth inning, though, when Scott Podsednik hit a home run. A two-run homer, because Josh Kroeger had doubled earlier. That's 2-1, right?

Norfolk had other plans, though. Let's talk about Lew Ford and stuff. Left fielder Antoan Richardson singled with one out in the bottom of the fifth. Lew Ford, center fielder, hit a sharp fly to left for a double. Shortstop Blake Davis hit a sac fly, scoring Richardson. And then Jamie Hoffman... Who is he again? Right fielder, got it. Hoffman hit a fly ball to center, scoring Ford.

There's one more run in the fifth, though, and it's Miguel Tejada's RBI single.

Lew Ford hit another RBI single in the sixth, off reliever Alex Wilson, because I guess Alex Wilson is a reliever for real now.

Oooh, some stuff went down in the seventh inning. The Tides made a defensive substitution at second base, removed the starter when he didn't get the first batter out, and when reliever Andy Loomis started mucking things up... He got the hook! Stu Pomeranz stepped in! And in case you forgot, the Norfolk manager is Ron Johnson. I wonder if he has more liberty with his new team? I'll bet he does. I'll bet he does! RJ can finally make some in-game moves that help the team win! It must be fun, being a for real baseball manager instead of... Well, whatever the managers do in Pawtucket. Babysit. Coach third base. Pick up dirty socks.

Lew Ford hit an RBI double in the eighth inning off Mark Melancon. Ford went 3-5, probably because he's got something to prove.

two things:
1. Josh Kroeger went 3-4 and got the only extra base hit for the Red Sox.

2. Che-Hsuan Lin to Boston, but the good news is Mauro Gomez has returned. I'm sure he's thrilled about that. Also, Salem catcher Carson Blair was called up to Pawtucket. I think Blair used to be an infielder.

Tonight! Doug Mathis v Chris Tillman. In the park, by the harbor, with the battleships and industry. Maybe something interesting will happen.
Posted by Jenks at 11:27 AM