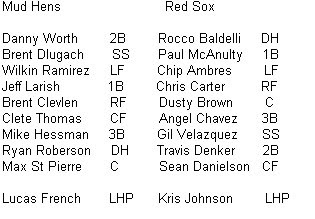 OG and left-handed thugg Kris Johnson got into the sixth inning. Johnson gave up only one run on four hits, a weak-ass solo homer hit by DH Ryan Roberson. What, no Mike Hessman?? No HESSMANIA???

Rocky Cherry and Chris George combined for hitless, scoreless relief. Daniel Bard figures in somewhere as well, but the real story here is Chris George. CG had like the worst headache ever and still pitched 2/3 of an inning with 2 K's.

Lucas French is a massive 22-year-old lefty. He only gave up two runs in seven innings but I guess that was enough. In the bottom of the third, Rocco Baldelli sac flied Travis Denker home. Denker had singled, advanced to second on an E7, then skipped over to third on a Danielson single.

Catcher Dusty Brown led off the bottom of the fourth with a double. Was it a scorching double or a fat, lazy double? I wasn't there. All the box says is 'fly ball to center'. Do you think I could call the ballpark and ask to speak to Dusty Brown?

Getting back to it... Angel Chavez grounds out and advances Brown and Gil Velazquez gets the RBI single. Doesn't that sound exciting?

Toledo relavista Scot Drucker was nails for the final two innings, with no hits and 4 K's, but alas, the Toledo Mud Hens offense was less than clutch. They left 8 runners on base and were 0-10 with runners in scoring position. Mike Hessman blew it twice in that regard. That is really unlike him. And Winchell? Wikki? Wendall? Wilkin? Wilkin! Wilkin Ramirez was both caught stealing and picked off.

two things:
1. Chris Carter, like the computer, made an error. Sean Danielson has something in common with Wilkin Ramirez: They were both picked off and CS. They also both really hate waiting for elevators but are unlikely to take the stairs.
2. Scot Drucker is a starter, not a reliever, but Dontrelle Willis pushed him to the pen. Willis also borrowed his soap and never gave it back.
3. You're not going to believe this, but the rehabbing Rocco Baldelli is from Rhode Island! OMG, that's where I live! Also, Jon Lester HAD CANCER AND BEAT IT!
4. Ryan Roberson's home run was his first of the year.
5. I've been to Toledo, but not the one in Ohio.

I'm pretty sure Julio Lugo's brother is starting for Toledo tonight. Daisuke Matsuzaka is in the house with amped up security. I guess it's too much for Rick to handle! I might stop by later in the game, after DM's gone.