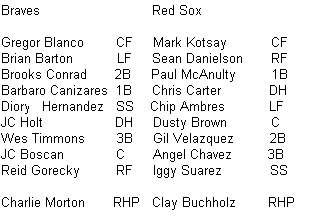 So Gwinnett's Charlie Morton pitched like Beckham, going seven innings and only giving up one run on two hits. Morton had ten glamorous strikeouts and three shameful walks.

See, what had happened was, Danielson kicked off Inning 4 with a sweet single. A couple of wild pitches later, Danielson was on third base and Chip Ambres batted him in. And that was all it took!

Everyday third baseman Angel Chavez, who I love, hit a double. He was the only other guy with a hit.

jolines!
1. I thought Mark Kotsay was dogging it to first base, but I just found out he hurt himself or something. He left the game and Corsaletti jumped in.
2. 'Star Wars Day' may have been the coolest thing I've seen all year. I especially liked the guy in the orange suit who was in the x-wing thing with Luke Skywalker but got killed. What was his name? Chet? Ramp? Something.
3. Fernando Cabrera did not pitch. I saw him in the dugout picking his nose... digging in pretty deep... then wiping it on his pants. And yet he is smokin'. HOT.
4. The Braves infielders made another dumdum error when no one caught a pop-up. E1, Danielson reaches.
5. Sandy Madera is still 'injured' and working as the bullpen catcher.
6. Jose Vaquedano continues to be impressive, working a couple of strong, hitless innings. He look great.
7. Former Twins roster stuffing Mariano Gomez is on the G-Braves. I think I said that already. I might also be thinking of Jo Matamura or something.

Tomorrow we open up a series with the Mud Hens at 6pm. Dontrelle Willis is likely appearing in Pawtucket on Wednesday. YES.
Posted by Jenks at 5:09 PM

NO, there was no Boba Fett! However, I did find out that Anakin Skywalker likes hotdogs!