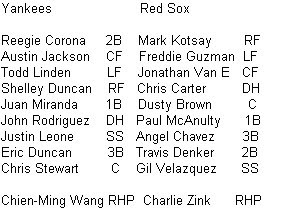 Zink! Pitched his balls off for eight innings and god bless him. Three hits, two walks and only one run? He pegged Austin Jackson at the top of the ninth, which got him replaced by the closer, but that's okay. Wow, I almost don't like SWB the same way I don't like NYY!

104 pitches for Charlie Zink. If I were a baseball player of limited intellect, I might say "Zinky was huge tonight. He picked the whole team up." Instead I'll just say I'm sorry I missed this.

Do you like home runs? Charlie Zink does! Van Every and Brown both hit solo homers off Towers. Wait... wasn't CMW supposed to pitch?? I already made out the lineup, which I hate doing so much!!! Eff it, I'm not changing anything.

Sultry Pawtucket closer Fernando Cabrera got the save. He gave up a hit to Todd Linden, but got the next three guys out. You should see Cabrera in the dugout with his long legs all stretched out... he always looks like he's just about to fall asleep.

yes, it's true:
1. Reegie. Not Reggie. That's what his name is.
2. It was Dusty Brown's first home run of the season. You should have seen his mustache. Pawtucket has a little mustache club going on. It's pretty scumhawk.
3. If you find Mark Kotsay exciting, he went 2-3.
4. Angel Chavez got a hit. There's a lot to love about AC. Please remember I said this when August rolls around and most of my love and good will has dissipated.
5. F-Cab allowed Zink's baserunner, Jackson, to score in the ninth when he gave up a hit to Hal Linden.
6. This game was only two hours long!

Tomorrow: Maybe Chien-Ming Wang? Anyway, post-game fireworks if you can stand it. I cannot.
Posted by Jenks at 11:24 PM