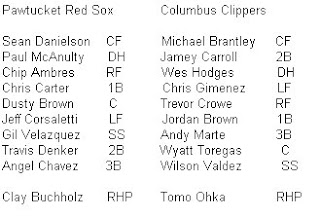 Pawtucket WINS their seventh game in a row! 4-0

By the way, the Clippers are the Bisons of last year, more or less. The lovely and talented Jordan Brown is still Cleveland property.

The suddenly 33-year-old Tomo Ohka started for Columbus, gave up eight hits and two runs in six innings, then went home and got a good night's sleep. Ohka's first mistake was catcher Dusty Brown's single at the top of the second... Brown wound up on second after a wild pitch. Gil Velazquez then doubled, driving in the run.

In the top of the fifth inning, Travis Denker hit a solo home run. It was his first Pawtucket home run... I'm not sure what he was doing before he came to town. Does it matter? It might, someday, if I decide Denker is interesting.

The PawSox went on to score two more runs in the top of the eighth inning, one off John Meloan, one (unearned) off Rich Rundles. Angel Chavez and Sean Danielson should be proud of their RBI singles. Plus Corsaletti got a hit, surprising people like me and Rocky Cherry.

Clay Buchholz pitched pretty deep into the game and was super-economical, tossing a mere 86 pitches through seven innings. Buchholz got 8 Columbus dudes to strike out. Then Rocky Cherry got one out, Chris George got one out... and a heavenly angel came out to the mound and pitched 1 1/3 innings without giving up a hit or a walk or anything. Fernando Cabrera is your number one Pawtucket reliever and is far and away the best looking guy on the team. I know that is highly inappropriate and unprofessional, but I am only human.

You know that dream where you're in bed and they fly in through the window?

moment by moment:
1. Buchholz mixed in a lot of change-ups... damn, he'll probably get called up sometime! It's too bad more people don't know about this kid!
2. I love it when Pawtucket plays these guys, because they get great blog/press coverage and plenty of material for me to use. Some of the other IL teams get less than zero interest. Tony Lastoria is especially awesome.
3. Oooh, crazy: Pauly Mac went 0-5, Dusty Brown went 4-5! Freaky Friday!
4. The Clippers have now lost six in a row. This may have something to do with Cleveland taking some of their good guys away.
5. Jamey Carroll is rehabbing and allegedly was a hot little fielder yesterday.
6. Gil Velazquez made another error! That's what happens when you're a sinner.

Anyway, gotta run. I hope you enjoyed this as much as I did.

So is that supposed to read 2009? Did I miss something?

If it was a mistake, I can relate. I once wrote something on my blog about Hideki Matsui's rookie year of "1993." Someone pointed it out and I couldn't believe I did it. Because even if I thought "93" instead of "03," you'd think the "19" and the "20" would make it so the mistake couldn't possibly be made. Then I saw someone else do it, and they were also in their 30s. I think this phenomenon only occurs once you reach your fourth decade. I totally remember my elementary school teachers saying "1972" instead of "1982" or whatever, and us all laughing--but it is weird that I'm now doing it AND taking it across centurial and millenial lines.

It's intentional. It's supposed to read like a WWII headline. One of those things I do to amuse myself.