5.7.09 PawSox/Mud Hens Once More with Feeling 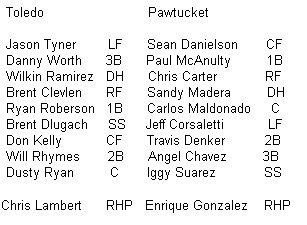 Your heavenly starting pitcher was righty Enrique Gonzalez. EG pitched into the seventh inning and even though Toledo got nine hits off him, they only scored one run. Again, the team failed to cash in on base runners. The Mud Hens were 1-13 with RISP and left 10 runners on base. And they can hit, too... I guess they are no match for PAWTUCKET POWER PITCHING! (Okay, that was cheesy.)

Jose Vaquedano continues to be a killer reliever. No hits or anything in his one inning. Well, okay, he walked Wilkin Ramirez in the seventh, but come on! That was a strike!

Billy Traber and His Giant Square Head held it down for the remainder of the game.

For Toledo, we got Chris Lambert, who had some time with the Tigers last year (1-2, 5.66). Lambert only made it through three innings before losing his way and walking among the wicked men. I hope he finds God and washes himself in the blood of the lamb!

Lambert's big problems began early. In the second inning, the always delightful Carlos Maldonado led things off with an innocent single. Corsaletti and Denker each hit subsequent singles to load the bases.... with no outs. After Angle C struck out, Iggy Suarez walked in a run.

Next batter: Sean Danielson, who cracked a double to center, scoring Corsaletti and Denker. Danielson's not a power guy, but he gets on base real good. Big Paul McAnulty was up next...and he hit a two-run single. The next two guys got out n' stuff, but there you go. Five runs.

Then, here's the awesome thing: In the bottom of the third inning, Angel Chavez hit a two-run homer. I'm very excited for him. Two home runs in two consecutive games after batting like crap thus far. PANAMA!

As far as Toledo goes... Enrique Gonzalez started to lose it a little bit in the seventh. He gave up a couple of singles, but had two outs when Danny Worth hit a line drive single, scoring Will Rhymes. And that was it. Vaquedano took over and snuffed 'em all out.

i reach down between my legs and ease the seat back:
1. Sandy Madera was 0-5 with a K. I urge him to start hitting!
2. In the sixth inning, Carter tried to stretch a single into a double, but was gunned down at second by outfielder Brent Clevlen. By the way, the substitute Pawtucket PA guy did not pronounce "Clevlen" correctly, which bugged me. He also messed up Gil Velazquez. Come on, now.
3. Van Every's back!
4. Gil Velazquez and Chip Ambres got the day off. Paul McAnulty has played in more games than anybody else... maybe he needs a day off! Or maybe he gets some kinda bonus if he plays x number of games?
5. Travis Denker went 3-3 with a walk.

From now on, every time I spell 'Angel' wrong, I am just going to leave it that way. I do know how to spell... 'Angle' is a typo, nothing more.

And also, you're drunk.