may 28th pawsox/bats - the power of chris compels me 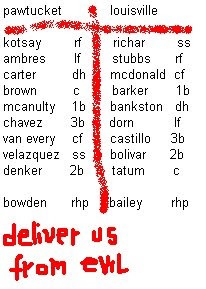 Interesting note: Pawtucket had 14 hits to Louisville's 13. Pawtucket left 12 guys on base! The sad thing is that Freddie G kept coming up with runners in scoring position, but come on... he's Freddie Guzman! I like to watch Guzman play, because he does it with verve and elan, but at times his eagerness gets him in trouble.

Reds prospecty stunner Homer Bailey got the start. Bailey gave up eleven hits in six innings but Pawtucket's hit conversion was in the toilet last night, so he got lucky with the two runs. I like to think that Homer B. would walk off the mound after the PawSox at-bats marveling at their ineptitude.

Mike Bowden.. or Michael, however he rolls. Mr. Type-A personality who has to fix his fucking pants/cup/socks after EVERY SINGLE PITCH (it rivals Nomar Garciaparra for fidgety analness) pitched into the fifth and then he had to go. Bowden threw 84 pitches and gave up two runs on six hits. He is also apparently made of porcelain.

Billy Traber and his Amazing Square Head (NOW! With mustache) gave up another run in his 1 1/3 innings. Favorite Fallen Idol Javier Lopez and his Amazing 13.50 ERA also pitched one and a third, but Lopez doubled the runs with two when Danny Dorn homered with Bankston on base. He suffered, died, and was buried.

Rocky Cherry and his Clean Conscience pitched the final inning and Louisville came up empty. Cherry's team didn't win or anything but his stats were ridin' dirty.

I'm so glad I wasn't at this game. I would have had bright red palm prints all over my face.

pray for me:
1. Danny Dorn had a killer night, going 3-4 with his home run and his outfield assist (he nailed Chris Carter at home).
2. Wait... isn't Wilkin Castillo a catcher? And he's playing third? That's pretty versatile.
3. Carter, JV, and Velazquez all hit doubles off Bailey.
4. Danielson and Ambres each stole a base.
5. Dusty Brown, on-base machine? Two hits and two walks? I'll take it and unwrap an ice cream sandwich while I watch.
6. Angel Chavez went 2-5. I wish he was my friend in real life. When he's on third base, he should be wearing a cape.