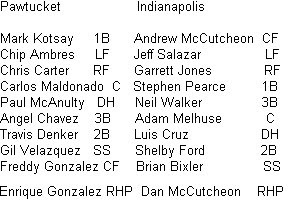 14-7 Indianapolis Indians. I think the most amazing part is that the Red Sox scored seven runs. And I am gonna set myself on fire.

Enrique G has not been that bad for Pawtucket, but lately his panty lines have been showing. Gonzalez (or 'Gonzo', if you have no imagination) pitched 4 1/3 innings, giving up 8 runs on 9 hits.

Indianapolis is the real story here, so let's go: Bottom two, big boy Steve Pearce leads off with a double. After Margin Walker flies out, Adam Melhuse (not dead yet) singles. Pearce to third... then designated hitter Luis Cruz hits an RBI double. That is what you call "Cruz Control"! I'm sorry.

Shelby Ford then has a productive out, grounding to first so Adam Melhuse can score. Brian Bixler doubles, Luis Cruz comes in for the third run. BRIAN BIXLER IS AFRAID OF THE DARK!!!

Pawtucket scored five runs at the top of the third... Indy scored another three to pull ahead immediately thereafter. Inning four was cool... came and went with no incident.

Fifth inning, everything fell apart for Pawtucket. Blood everywhere. Scraps of charred paper fell from the sky like tacky butterflies... we all cried. Velvet Jones started the battery with a little single, very innocent. And then the oafish Jones stole second. If Garrett Jones is stealing on you, then you may need to work on some things. I don't want to blame catcher Carlos Maldonado because I am his number one fan... but I might not want to blame Gonzalez, either.

Okay, so Jones steals, Pearce is at bat in his leather jacket and he singles. Runners at the corners, nobody out. Neil Walker flies out to center, allowing G. Jones to score. Randor Bierd is off the TIL! Bierd trots in from the bullpen purposefully. But then: "Adam Melhuse reaches on force attempt, missed catch error by second baseman Travis Denker, assist to shortstop Gil Velazquez. Steve Pearce to 2nd."

Everybody got that? Can I stop now? No.

DH Luis Cruz is hit by Bierd's pitch. Bases loaded, one out. Indians fans are cheering wildly (I guess). And then Shelby Ford hits a grounder to first, which Kotsay messes up somehow, allowing Ford to reach and Pearce to score. Brian Bixler is up next, hits a two-run single.

I have to stop now.

But I'll do the list because it's the easiest part.

you make yourself so beautiful:
1. Freddie Guzman and Chip Ambres both tripled. Two triples in one game is as rare as a sensitive fascist.
2. Pauly Mac hit a 3-run homer.
3. Randor Bierd's ERA is currently 15.43. I'm not saying David Pauley was like Ted Lilly or anything, but... I don't know what I'm saying.
4. Adam Melhuse! Wow! And at first I thought Shelby Ford was Lew Ford, but didn't he retire?
5. Chip Ambres is batting .266, which may be the highest average out of all the every day guys. We are reliving 2007 in Pawtucket. Also: Chip Ambres is a good, good man.