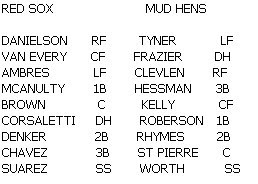 Toledo finally WINS! 1-0 in ten innings. This game started at 10:30 am so schoolkids could have an adorable field trip. After the game, the Mud Hens must have sucked down some bloody marys hardcore at Le Foyer in one of the function rooms. YEAH BREAKFAST BUFFET!!!

The game was tied at zero the whole time... until Billy Traber and his Amazing Square Head took over in the tenth and failed to help Buchholz.

Toledo righty Casey Fien got the win, though, which is really a shame. Congratulations to second baseman Will Rhymes for getting the winning run home.

Let's get a closer look at Eddie Bonine!
1. Bonine has pitched a total of nine games with Detroit between '08 (as a starter)-'09 (out of the pen).
2. Bonine was originally drafted 23rd round by San Diego in '03. He came to the Detroit org in 2006.
3. Bonine was in Detroit this year while Joel Zumaya was on the DL. Zumaya back, Bonine down to AAA.
4. Wait... he's got a knuckleball? WHAT.
5. Eddie B went to University of Nevada. LADY WOLFPACK!!! I once walked past the campus when I lived in Reno.
6. Former Boston reliever Scott Williamson may have a beef with Bonine... he was released so Eddie could squeeze onto the roster.
7. Eddie Bonine's mom has breast cancer. Sad.

That's all for now. I was thinking about listing all the PawSox players at-bat songs, but I can't remember that many. Two guys have a Kanye song, though.
Posted by Jenks at 1:30 PM