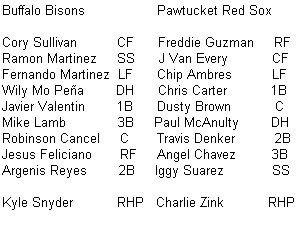 Pawtucket WINS! 3-2. Geez, was that so freaking hard?

Charlie Zink showed mild-to-moderate improvement in tonight's start. Zink gave up two earned runs on six hits in six innings. He did not hit anyone with his soft, floaty knuckleball. Some of his pitches sailed over the batters' heads... it was dramatic and not at all funny.

Zink walked Fernando Martinez, Robinson Cancel, and Jesus Feliciano. That would be Jesus, not 'Jose' Feliciano. I'm talking to YOU, brain!

Zink gave up both runs in the third inning. Fernando Martinez hit the ball hardish up the infield, Zink got after it and threw awkwardly to carter at first. The ball went past Carter and F-Mart wound up at third thanks to ZInk's throwing error.

The next batter was Wily Mo Pena. No, not the same guy that played in Boston! This is a different Wily Mo Pena! He's some guy in the Mets minor league system. You should see him, he's huge!

Wily Mo Pena hit an RBI double. First baseman Javier Valentin was up next and Zink threw a wild pitch which allowed Pena to scoot over to third. Valentin then hit an RBI single. Two runs.

Kyle Snyder looked pretty good in his start... at first. Snyder got yanked in the sixth inning after Chris Carter's two-run double. Reliever Carlos Muniz then gave up an RBI single to Paul McAnulty, giving Pawtucket the lead. YES.

switzer, look over here! who are you wearing?
1. Misc celebrities in the hizz tonight: Wily Mo, Javier Valentin, former PawSox lefty reliever and metrosexual Jon Switzer, freshly DFA'd Javier Lopez, Kyle Snyder of course, Mike Lamb... err... and Global Guitar Sensation Jose Feliciano!!!
2. Recently I predicted Jeff Corsaletti's demise. Well, he's gone. And now I have to figure out Freddie Guzman.
3. John Otness up from Portland. I'm pretty sure he has a moustache.
4. I think it's pretty funny that Jason Cooper is STILL on the Bisons, even though they switched franchises. Doesn't he hold the record for most games played as a Bison? HE WILL NOT BE BEATEN!!!