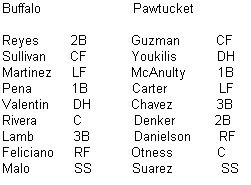 Buffalo sent righty Brandon Knight to the mound. Knight only gave up two runs in six innings. Reliever Carlos Muniz came into the game with a 3-2 lead, but it was blown to hell when scorching hot Angel Chavez knocked a two-run homer out. Wow.

Clay Buchholz was good, not great. 4 1/3 innings and he kinda threw 94 pitches and not so many strikes. Fernando Martinez, who is Number One USA prospect, hit a solo HR off Buchholz in the third and then again in the fifth. The second home run was ruled a double, initially, but the umps conferred and changed the call to a home run. There's this yellow line out on the outfield wall, see...

Marcus McBeth's relief appearance can only described as Lucy in the Sky with Diamonds. McBeth went long, 2 2/3 innings, and only gave up one hit - a double to catcher Rene Rivera. I thought he was going to be out there forever.

Bullpen righty and sex kitten Fernando Cabrera came in for the save (post-Chavez explosion). After getting Jesus Feliciano out, he walked Johnny Malo... and threw a wild pitch! Malo ran and ran and yeah, he did cross home plate but it didn't tie the game. Fortunately, the ball wound up in the dugout. Ground rule double?

Cabrera got the last two batters out, but it was so close. Easy as a nuclear war.

i wrote this song in the park:
1. Pawtucket risked both our lives in the first inning. Freddie Guzman led everything off with a walk and a stolen base. Two-hole batter Kev Youkilis grounded out, moving the runner to third. Then this:
"Paul McAnulty hit into fielder's choice double play, shortstop Jonathan Malo to third baseman Mike Lamb to second baseman Argenis Reyes to first baseman Wily Mo Pena to second baseman Argenis Reyes. Freddy Guzman out at home. Paul McAnulty out at 2nd."
I got all bollixed up trying to score this, but basically both Guzman and Mac were caught in rundowns. I'm sure RJ was thrilled. Good thing the team ultimately won!
2. When relievers stroll into the dugout from the bullpen between innings to top off their coffee or whatever, why do they walk like Reservoir Dogs? Nice and slow, see? That's the way to do it.
3. Paul McAnulty hurt his hand in the fourth inning whilst executing the back end of a 1-3 force (Mike Lamb)(kins). It must have been killing him! He had to step off and bend over... owwww...
4. MANIELSON! Big oaf Wily Mo Pena cranked a fat single to left with a runner in scoring position. Argenis Reyes and his weird-ass hair were DENIED the run because of Sean Danielson's freaking amazing power throw to the infield! Reyes only made it to third.
5. Iggy Suarez hit his first Pawtucket home run.

Day off tomorrow, then the Yankees.