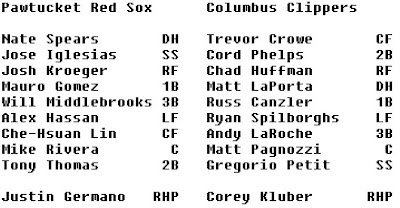 Clippers win, damn it! They took it 3-2 in a neat little package of a game. Neither of the starters figured in the decision with Clayton Mortensen getting socked with the loss and Columbus reliever Cody Allen getting the big win... A BIG GOLD WIN.

Justin Germano started the game for Pawtucket Town, pitching and grinning through 5 1/3 innings. Germano was in pretty good shape for a while, working with a lead until the sixth inning. But dirty old pencil stub Cord Phelps led the sixth off with a solo home run and things just began to fray. Germano got an out, but three Columbus batters singled and pushed another run over to tie the game. Aw, crap.

Clayton Mortensen... Can I just call him Dr. Forrester? My fingers cannot type Mortensen! It's like all the times I typed 'Angle' Chavez or Sanchez! Try it at home, I promise you, it defies your QWERTY keyboard. Okay, Clay and the Clay-Tones wrapped up the sixth inning, but DH and overall disappointment Matt LaPorta grounded into a force out to score a third run for the Clippers.

By the way, Che-Hsuan Lin and Alex Hassan each came to the plate TWICE with runners in scoring position and made the last out. You guys are jerks, go have mochaccinos together at Cafe Useless.

Nate Spears is back and super-stoked to be in the minors again. He led off the first inning with a double and wound up going 3-5. Mauro Gomez, who I felt would just stack K's in this game, got a couple of doubles and an RBI. I love you, sweet crazy baseball.

I didn't forget you, Josh! Kroeger also doubled, in the seventh inning. And hit a single, which is less interesting.

This is one tough team.

And I do exactly what I want when I'm with him. And when I'm not:
1. Will Inman pitched the last of the game and struck out Ryan Spilborghs. I am not sure what Inman looks like so I am going to find a picture. Be right back.
2. Okay. A personality might be that extra push over the cliff.
3. "Things got interesting when Mauro Gomez stepped to the plate. He popped up a ball to the first base side of the pitcher's mound. Columbus starter Corey Kluber got into postion to catch it but was called off by first baseman Russ Canzler, who dropped the ball. Canzler retrieved the ball and flipped toward first base where no one wearing a Clipper uniform was in sight. Spears scored on the error. While the ball rolled toward the Columbus bullpen Kroeger went to third and Gomez reached first. Canzler was charged with two errors." - Jim Massie, Columbus paper
4. This game was three hours and ten minutes long, which seems like a lot for a 3-2 game. Perhaps it was the 17 combined hits.
5. The Clippers logo looks like the letter 'C' and an anchor grinding on each other, or humping, or like... Doing it. The letter C is a freak!
6. SoxProspects.com forum comment of the day: "Germano: stuck in Pawtuckie like an indentured servant. No options, not a 40-man man. Needed his agent to negotiate the Aaron Cook clause." (DesignatedForAssignment) Pawtuckie?
7. This was posted today and... It blew my mind. I thought I'd fallen through a wormhole. Grand slam? Home game? When did this happen?
8. Will Inman is running out of time, according to a Red Sox Fan in Nebraska. I heard they have a gang problem in Omaha. Also, states like Nebraska usually have a meth problem. It's so great to live in drug- and gang-free Rhode Island!

TO... NIGHT? DAY? TONIGHT! Brandon Duckworth, David Huff. And the clock ticks on Aaron Cook, the Most Important Man On the PawSox.