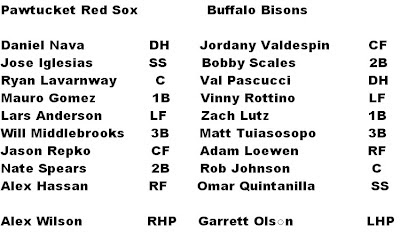 Pawtucket wins 9-6, in a contest to see who could pitch worse.

Bisons starter Garrett "Mrs" Olson made it to the fifth inning, but split the band when he loaded the bases with no outs. I'll get back to that.

Alex Wilson was hand-picked to start this game. He gave up a lot of hits through his five innings, most notably three doubles. And I'm probably going to have to get back to that later as well.

Why not try the first inning? DH Daniel Nava led off with a walk and Jose Iglesias sac'd him over. Olsen then walked Ryan Lavarnway. It was uncomfortable for everyone involved, but got worse when Mauro Gomez came to town. Gomez of course hit the ball, a single to left, scoring Nava. After Lars Anderson flied out, Will Middlebrooks whipped out a single, but Jason Repko struck out swinging to end the inning. 1-0.

In the bottom of the second, first baseman Zach Lutz led off with a double. Lutz made it to third on an error, then scored on a sac fly. Some other guys were on base, too. I'm getting overwhelmed. Jordany Valdespin doubled and the inning ended with Buffalo up 2-1.

Okay, now back to Garrett Olson in the fifth inning... Bases loaded after he IBB'd Lavarnway. Nobody is out. Exit Garrett Olson, enter Jeff Stevens. And it's Mauro Gomez at bat! Big trouble in New York... or so you'd think, but Stevens whiffed the kid and Bisons fans released all the tension in their collective buttocks.

Anderson was up next, and I can't say for sure what happened but Zach Lutz made a nasty gaffe at first and two guys scored. Anderson stood at second when the dust settled. And then, Pawtucket fans, came the money shot. Big, bright shining star Will Middlebrooks... Your sexiest prospect crush... The second coming, the all-day sucker, the diamonds and the rust... HOME RUN, JONRON, whatever you call it, he hit it. AND YOU MISSED IT BECAUSE YOU WERE SCARED TO GO TO BUFFALO IN APRIL!!! HAAA HAAA!!!

In other news, Garrett Mock pitched the last two innings for the Red Sox and no one scored. Mock struck out four batters, so perhaps he's not butterfly-fragile at this point.

The were other innings, other runs, but I don't have much time because I have to go to church. Like I do every Sunday, I go to church and sing hymns and pray and donate and stuff. Evolution, schmevolution!

nate spears has never been mellow. he has never tried:
1. Mike Harrington explains it all: "The Bisons had a 2-1 lead and the bases were loaded with two outs in the fifth after reliever Jeff Stevens struck out Mauro Gomez. It looked like Stevens would escape the inning when Lars Anderson pulled a two-hopper down the first-base line, but the ball eluded Lutz as two runs scored." - news

MIKE HARRINGTON REFERRED TO WILL MIDDLEBROOKS AS 'ROB'! WHAT THE FUCK IS WRONG WITH PEOPLE???! DON'T YOU HAVE THIS INFORMATION AT YOUR FINGERTIPS? ARE YOU NOT A PAID SPORTSWRITER?!

I'm almost too disgusted to continue.

2. Jason Repko went 3-5, which is why he's now in a better place. Jason Repko died, is what I'm trying to say.
3. Here, read this thing about Bobby Scales. Bobby Scales is un-fucking-touchable and if you don't love him, you're even dumber than I thought.

Not much about the game out there this afternoon, probably because it's Sunday. Guess what? Much like cops, I never sleep.

Day game! Doug Mathis, Matt Harvey. When I need Doug, I just close my eyes and I'm with Doug. And so should you. Go to the game, what else are you doing, my sweet Buffalonians?
Posted by Jenks at 9:37 AM